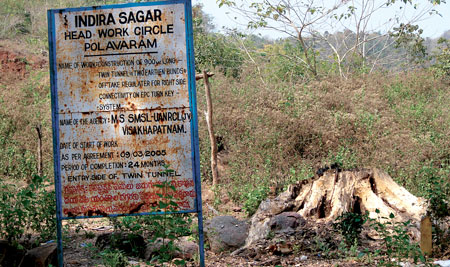 The Rajya Sabha passed the controversial Andhra Pradesh Reorganisation (Amendment) Bill of 2014 on Monday through voice vote amid heated exchanges among members of the House opposing and supporting the Bill.

The Bill provides for the transfer of seven mandals (talukas) in the newly formed Telangana state to the residual state of Andhra Pradesh for the sake of the Indira Sagar Polavaram Irrigation Project. The Lok

Sabha has already cleared the Bill on July 11 through voice vote. The seven mandals—five fully and two partially—fall in the submergence area of the project.

The Amendment Bill was opposed by members of Parliament from Telangana, Odisha and Chhattisgarh while those from Andhra Pradesh extended full support to the Bill. Members from Telangana described the Bill as unconstitutional. The Narendra Modi led-Bharatiya Janata

Party government, which came into power in May, promulgated the Andhra Pradesh Reorganisation (amendment ) Ordinance on May 28. Telangana

chief minister K Chandrasekhar Rao and many other political leaders from Telangana point out that the ordinance as well as the amendment Bill now passed by Parliament are unconstitutional. According to Article 3 of the Constitution, while changing the boundaries of a state, the state Assembly should be consulted. Article 3 makes it mandatory for the President of India to send the Bill to the state Assembly for consultation; the state assembly should have discussed the issues and informed the Centre its decision on the Bill. However, this has not happened in the case of this Bill, they point out.

When the previous Congress-led United Progressive Alliance government at the Centre decided to bifurcate Andhra Pradesh it ensured that Polavaram was given national status. The proposal to transfer the villages that would be submerged in Telangana to Andhra Pradesh was

also made by the Congress government. But this was not clearly stated in the Andhra Pradesh Reorganisation Bill 2014 passed by both the houses through voice vote in February this year amid noisy scenes and even black outs of the proceedings. This led to the promulgation of ordinance and then the amendment Bill by the Modi government.

Large-scale submergence and displacement
Those who opposed the Bill pointed out that the project would cause large-scale submergence. The mega multi-purpose dam across the river Godavari, which has been now given national status, is under construction in West Godavari district of  Andhra Pradesh. The Polavaram

project report was initially prepared in 1978 and later in 2005 it was again taken up by the then Congress chief minister of the state, Y S Rajasekhara Reddy. The dam is supposed to irrigate 288,000 hectares of new areas in West Godavari, East Godavari, Krishna and Visakhapatnam districts—all in coastal Andhra. The project is

Andhra Pradesh government has already spent Rs 4,144 crore till August 2011. The cost of the project has gone up to around Rs 20,000 crore now.

Adivasi organisations and political parties in Telangana, including Telangana Rashtra Samithi, have been opposing the project, highlighting the fact that most of the villages that would be submerged fall within two revenue divisions in Khammam district in Telangana while the project benefits only the coastal Andhra districts. The dam is

of the villages that would be submerged fall in Schedule Five areas where adivasis enjoy special rights. At least 63,691 hectares of forestland in Telangana, Andhra Pradesh, Chhattisgarh and Odisha would be submerged by the project. To ensure that Telangana will not raise objections against the project that will benefit only coastal

Andhra districts, the villages that would be submerged in the state have been transferred to Andhra Pradesh through the amendment Bill.

Adivasi organisations had intnsified their agitations for the past many months against the Centre's plan to transfer the villages. They have been highlighting the issue of

submergence and the government not having proper plans for resettlement and rehabilitation of those would be displaced. Even as the Right to Fair Compensation and Transparency in Land Acquisition, Rehabilitation and Resettlement Act, 2013, provides for giving equal

area of land to those who lost their land by the irrigation project in the command area of the project itself, the Act has not been applied in the case of those getting displaced by the Polavaram project. Many gram sabhas in Khammam district have passed resolutions against the project. Political Parties, including TRS, which had opposed the project, did not come out strongly against the Centre's plan to

give national status to the project and transfer the villages in submergence area in Telangana to Andhra Pradesh.

Countering the allegations that the Ordinance and the Bill are unconstitutional, Union Home Minister Rajnath Singh said the government had not violated any constitutional norm. He assured the House that the Centre would take all possible steps for rehabilitation and resettlement of the affected people.

Despite the passage of the Bill transferring the villages, construction of the controversial Polavaram project would be difficult to execute in the near future as the project might get entangled in the legal battles. Telanagana government is considering legal course of action against changing the boundaries of the state for the project. Chhattisgarh and Odisha are against the project and moved the Supreme Court, highlighting large-scale submergence by the project.