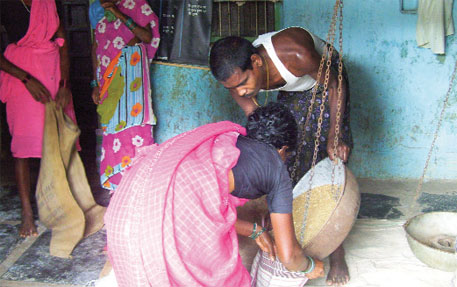 THE Central government has gone on an overdrive to get the National Food Security Bill, UPA’s big-ticket programme for the 2014 general elections, passed in the forthcoming budget session. But it lost the race to states ruled by opposition parties, which are initiating their own food security laws.

The budget session is the last opportunity for UPA to keep its election promise and get the bill passed. If enacted, the country’s 75 per cent rural and 50 per cent urban population will get subsidised foodgrain as entitlement.

On December 22, Bharatiya Janata Party (BJP)-ruled Chhattisgarh enacted its own state food security law. Odisha, Madhya Pradesh, Bihar and Tamil Nadu, all ruled by non-Congress parties, are expected to enact their laws soon. Political analysts say it is a masterstroke by the opposition parties.

Unlike the national bill, Chhattisgarh does not put a cap on the number of persons entitled to subsidised foodgrain. In fact, it takes a step ahead and covers even the Antyodaya (poorest of the poor) households. Food rights activists praise Chhattisgarh for making 90 per cent of its population entitled to foodgrain. The state also seeks to increase the commodities under the public distribution system.

“The bill, in its present form, is unacceptable to most non-Congress states,” says Biraj Patnaik, principal adviser to the Supreme Court-appointed Commissioners on the Right to Food case.

On January 17, the parliamentary standing committee submitted its report on the bill, paving the way for its enactment. But with most states opposing it, intense debates are likely to take place in the budget session which may derail its enactment. The states demand universal entitlement to foodgrain, financed by the Central government.

Soon after the bill was tabled in Parliament in 2011, the Tamil Nadu Assembly, supported by AIDMK, passed a resolution against it, saying the state had already covered all the people in Tamil Nadu under subsidised foodgrain schemes. Chhattisgarh chief minister wrote to the prime minister against it, while Bihar’s chief minister protested it. Odisha chief minister appealed for universalisation of the food security bill. “In its present form, the bill will serve only 6.5 millions of the BPL population in Bihar,” says Shyam Rajak, state minister of food and civil supplies. The current BPL population in Bihar is 13.5 million, he says.

The Congress is in a dilemma with states eager to match Chhattisgarh’s steps in the national bill. The standing committee report added fuel to fire. While it sticks to the bill’s proposal of covering 75 per cent rural and 50 per cent urban population, it gives states the responsibility to increase coverage.

The Centre is caught between economic prudence and people’s interests. “Additional Rs 94,419 crore, besides the present food subsidy of Rs 52,490, would be required to implement the bill,” says Praveen Jha, who teaches economics at Jawaharlal Nehru University in Delhi.

There was heated discussion over the bill at the brain-storming session of the Congress in Jaipur on January 20, attended by party chief Sonia Gandhi and the prime minister. While some leaders want the bill operationalised, the party wants to push the direct cash transfer programme. This may be critical for the Congress, for the party sees direct cash transfer programme and the food bill as its key vote winners.