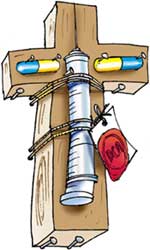 India is moving towards amending a law to introduce provisions that will make it impossible for Indian pharmaceutical companies to produce generic versions of patented drugs. If it goes through we can say goodbye to cheap versions of expensive, sometimes life-saving, drugs produced by mncs.

The government wants to amend the Drugs and Cosmetics Act (dca), 1940, to introduce a clause on 'data exclusivity' to plug a hole in the Patents Act 1970. The proposed clause will give regulatory authorities the right to withhold data on a drug, making it difficult to register generic drugs. The provisions of the Patents Act now allows companies that backward engineer patented drugs to create generic versions to access data and register their drugs if regulatory authorities find, after three years of monitoring, that the drug is not widely available at affordable rates.

The new amendment will stop this practice by introducing a new testing regime. As of now backward engineering works because original data is put out in the public domain, which means that backward engineered drugs don't need to go through a fresh, expensive and time-consuming testing and validation process. With data becoming 'exclusive', backward-engineered drugs will have to go through the gamut of testing procedures. "This means at least 8-10 years of drug development and trial and on an average a spending of at least us $50 million per individual drug. A costly and nearly impossible affair for an India company, with certain exceptions," says Geeta Shah, a Mumbai-based pharmaceuticals consultant.

In most countries that have data exclusivity provisions, data remains exclusive for five years. But experts say this should not give generic drug manufacturers false hope since it is easy for patenting companies to get extensions.

The proponents of the proposed amendment say it is required for India to be compliant with the World Trade Organization's (wto's) trade-related intellectual property rights regime. A joint secretary in the Union ministry of chemicals and fertilisers, which has constituted a committee to bring about the amendment, says, Without this provision every year India is losing 70 per cent investment in this sector. Already our intellectual property laws are weak and China is gaining. To make India a pharma manufacturing hub we definitely need this." According to the us National Institutes of Health, lack of data exclusivity is why India ranks ninth (China, which has data exclusivity provisions, ranks second) in funding it gives it to countries outside the us .

But there is another side to the story. India is the largest manufacturer of generic drugs in the developing world, with 8 per cent of the global market, which has bee made possible by the existing patent regime. Also some people question the need to introduce this clause to ensure compliance with the trips regime. Science commentator Amit Sengupta writes, for example, in People's Democracy, the weekly organ of the Communist Party of India (Marxist), that article 39(3) of the trips agreement, invoked in support of the amendment, merely talks about data protection, which the Patents Act already deals with, and not a monopolistic data exclusivity regime.

What's driving the new initiative is pressure from mncs in the industrialised world, observers say. "This provision is important for mnc s because it will provide de facto monopoly rights to unpatented, non-patentable and pre-1995 (trips) patented drugs. Which means any invention which is not novel will also get equal rights as a patent," says lawyer Asha Mohan of the Lawyers Collective. In other words, companies can innovate on old drugs, which should not be eligible for patenting because they are not novel, and get them patented under the data exclusivity clause.

The us $40-billion Indian pharmaceutical industry is facing testing times.