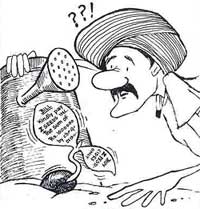 The Union government claims it has found a way to protect the interests of Indian farmers in the ongoing Uruguay round of the General Agreement on Tariffs and Trade (GATT). For some time now, the Centre has faced the ire of the farmers, who strongly protest the clause in the Dunkel draft proposals relating to patenting of seeds and plant varieties. The farmers feel these conditionalities will take away their traditional right to use and conserve seed varieties for future crops.

The controversial clause requires GATT member-countries to "provide protection of plant varieties either by patents or by an effective sui generis system". The Union commerce ministry has said India will adopt the 1978 version of the Union Pour le Protection des Obtentions Vegetals (UPOV) Convention, which allows farmers to keep part of the harvested produce for successive crops on his own holding, even if obtained from protected seeds.

However, some members of the consultative committee say the latest version of the UPOV Convention overlooks the earlier guaranteed farmers' rights. Says Hannan Molla, CPM representative in the Lok Sabha, "The government has been able to give us no plausible reason as to why the industrialised countries will be content with us adopting the earlier version of the convention."

Ministry officials, on their part, claim the major negotiating countries in the GATT talks, including those of the European Community, have already "informally agreed" to allow India to use the 1978 version.