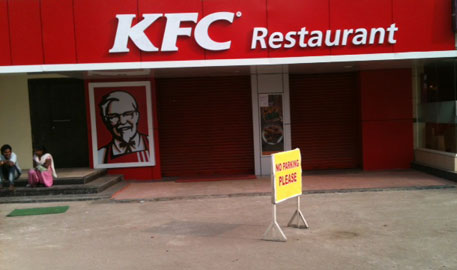 The lone Kentucky Fried Chicken (KFC) outlet in Patna was raided last night for operating without a valid licence.
Officials of the food and safety department of Bihar visited the outlet to check its application and operation licence. Food and safety commissioner Sanjay Kumar said the food giant in Patna had not even applied for a licence to operate the restaurant.

The raiding team immediately ordered closure of the outlet. Food samples were also collected to ensure safety standard of food served at the outlet. The sealed samples have been sent to a laboratory in Dhanbad for testing. In October this year, Kochi outlet of the KFC was issued closure order when a family found worms in the chicken served to them.

The KFC chain in India is run by Yum Brands Inc. The food safety department has not ruled out the possibility of substandard oil or spices being used in the outlet. During the raid, customers were allowed to finish their meals. The outlet was sealed after the last customer left from the outlet.

Kumar said that KFC outlet will remain sealed till the franchisee or owners file an application for procuring licence from the department. Officials of KFC, Patna could not be contacted despite repeated attempts.