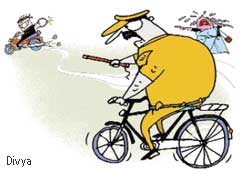 Nagpur cops say it's effective, but are back on motorcycles

in march, the Nagpur police department launched a scheme to increase its visibility in the city. It introduced beat patrolling on bicycles. The experiment proved to be short-lived as a spate of chain-snatching incidents forced the cops to give up bicycles for motorcycles.

The scheme was meant to enable patrolling police reach to go into narrow lanes in congested areas, said police commissioner Praveen Dixit. "It would have saved us petrol bills," he said. Over a dozen police on bicycles were deployed in Rana Pratap Nagar police station in west Nagpur and the result was marked.

The bicycle patrol was discontinued during the elections. It could not be resumed after that due to chain snatching incidents."Bicycle patrol can't be resumed, until the problem is controlled," said Vijay Bahekar, assistant commissioner of police, Sonegaon, who is in-charge of Rana Pratap Nagar police station.

Police constable Santosh Pundkar who patrolled Rana Pratap Nagar on a bicycle said: "It gave me the opportunity to interact with the public." He, however, said this form of patrolling is effective only against certain types of crimes. A lone policeman on a bicycle cannot tackle tough criminals on speeding vehicles, he said.