Labourers in Tripura plantations get a better deal 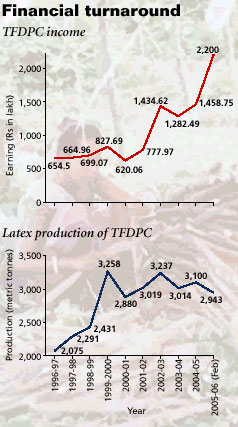 the forest managers of Tripura might not have done anything to settle the rights of tribals dispalced from their land, but they've started paying their casual labourers better. About 30 years after its creation, the Tripura Forest Development and Plantation Corporation (tfdpc) earned its highest-ever profit in 2005 (see graph : Financial turnaround). This has also meant better wages to the casual labourers it employs -- more than 6,000 tribals and non-tribal settlers. The casual workers, called 'daily-rated workers', are getting better returns for their labour.

Parimal Das is a resident of Saidapar village in North Tripura and was one of the first to be hired by tfdpc in 1976. Today, in his middle age, he is earning about Rs 300 per day because of a policy change in the corporation. Several daily workers have benefitted similarly from the corporation's new salary and incentive policy.

The history of forestland in the state is a long tale of unsettled land rights. The tribals of Tripura practised jhum (slash-and-burn cultivation), which the government doesn't approve of. While jhum is not acceptable to the government, monoculture plantations of rubber fit into its idea of forestry.

" tfdpc was set up in 1976 as an undertaking of the state government (with equity participation from the Tripura forest department) and the Central government. The major objective was the rehabilitation of jhum practitioners to rubber plantations," says Jasbir Tripura, tfdpc chairperson. The initial capital investment was Rs 10 lakh and the authorised capital Rs 5 crore. In 1983, the state government set up another comapny: the Tripura Rehabilitation and Plantation Corporation (trpc), handing it the reponsibility of 'rehabilitation'. So tfdpc 's mandate was restricted to managing plantaions.

For this, it employed casual workers. Rubber plantations on leased forestland started earning profits for tfdpc in 2001. But the money didn't quite trickle down. The casual workers, who were expected to dig at least 25 pits or plant 38 rubber saplings daily (besides clearing up the forest), were paid Rs 50. The workers were supposed to be paid an incentive of Rs 1.59 for each additional pits dug or sapling planted. But the dues were seldom paid. Rakesh Sukhladas, an old tfdpc worker from Bishramganj, did not get the incentive for over two years. "We had lost interest as there was no certainty of payment. We worked from 8.30 in the morning to noon each day, and then pulled rickshaws and or carted vegetables to make ends meet," he rues.

Things started changing in 2002. While the daily wage was still Rs 50 for digging 16 pits or planting 20 saplings, the workers started getting Rs 3 for each additional pit dug and Rs 2.50 for each additional sapling planted. tfdpc now expects the workers to also collect latex. As of April 2005, they get Rs 60 as daily wages for collecting 60 litres of latex. In addition, they are paid Rs 9 for every three litres of latex collected.

In 2005-06, it announced a new profit-sharing incentive. Earlier, workers were expected to collect raw latex from 300 rubber trees per day. These targets were never met because there were no incentives. Today, workers get wages and incentives at the end of the working day. The management also ensures a regular supply of tools.

"The net profit for 2005-06 is expected to exceed the target. tfdpc has paid Rs 35 lakh to workers as part of the profit sharing-policy till November 2005, and it is expected that the amount payable will double by the end of 2006. The state government has stopped funds to tfdpc following the growing profit trend," says the chairperson of the corporation, which paid 3 per cent dividend to the state government.