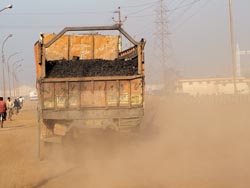 the Chhattisgarh government reiterated in February that industries not in compliance with emission norms could not be established in three industrial areas in Raipur, the state's capital, until companies submit a blueprint for pollution control measures. The directive came after the Chhattisgarh State Environment Conservation Board (csecb) issued two notices to several units in December 2006 and again in January 2007.

"The government has decided not to allow more industries in these areas," said state industry minister Rajesh Munat. "I hope more stringent pollution control norms in industrial areas will help bring down pollution in the city," said Ganesh Ram Bhagat, the state housing and environment minister

In October 2006, the National Environmental Engineering Research Institute (neeri), Nagpur, had conducted a study of industrial areas in Siltara, Borjhara and Urla in Raipur. Its report recommended that no defaulting industry be allowed to operate beyond six months. the Chhattisgarh High Court had directed neeri in July 2006 to conduct the study in response to a public interest petition The petition followed complaints from farmers in the area of blackened paddy, poor productivity and respiratory problems. They also said their cattle had become less productive. neeri's report confirmed these claims.

When neeri conducted its survey, around 150 polluting units were operating in the area. Of these, 43 were sponge iron plants. The rest were rolling mills or ferro alloy units. The report said they were exceeding Central Pollution Control Board norms on particulate emissions. The study also found that more than 300-350 heavy-duty trucks ply on the nearby highway causing major vehicular traffic and pollution.

The report recommended that csecb should issue fresh clearances after ascertaining whether units had put in place remedial measures. The report also asked it to establish treatment, storage and disposal facilities for hazardous waste, within a year.