A bicycle costs more, a scooter costs less. Thanks to the finance minister 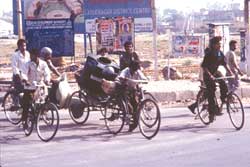 it is convoluted logic. While the world talks of lowering vehicular pollution and encouraging non-polluting vehicles, the Indian finance minister goes ahead and increases excise duty on cng, the green fuel and yes, the humble bicycle, the most economical and non-polluting mode of travel.

According to the bicycle association in Delhi, the current budget has hiked excise duty on bicycles and its components by four per cent, which is likely to substantially increase the selling price of this poor man's vehicle. The bicycle industry avers that cascading effect of each component of the bicycle would make the bicycle manufacturing uneconomical and unaffordable to common people. Besides, it would also hit the small-scale units very hard.

Most bicycle components and bicycle spare parts in India are manufactured by the small scale industries (ssis), while the large scale units manufacture bicycle frames, chains and rims. Further, the duty hike may ultimately lead to a total excise incidence of over 25 per cent on a bicycle as parts and accessories are sourced from over 156 component manufacturers. According to Akhil Mathur general manager of Avon cycles, the hike in duty levied on bicycle components will make bicycles costlier by about Rs 125-150.

Government policies instead of encouraging use of bicycles have given preferential treatment to the use of polluting motorised vehicles. For instance, the Union budget over the past two years has been bringing down the prices of private vehicles. In the current budget the duty on two-wheelers and cars has been reduced to 16 per cent and 32 per cent respectively. "The government is making two wheelers and cars cheaper and discouraging common people to buy bicycles by imposing excise duty on it," says Harish Kapoor, executive secretary, All India Cycle Manufacturers Association.

Contrarily, there are no separate lanes for the cyclists and the cycle remains the vehicle of the small income groups in Indian cities. No one seems to think that non motorised transport like bicycle could be an important alternative to relying on private vehicles. Bicycles can travel up to 1,500 pollution-free miles on the food energy equivalent of one gallon of petrol. They also increase the person-carrying capacity of a roadway by something like 600 to 800 per cent because they take so much less space.

Moreover, for up to five kilometre journey, you can reach your destination by a bicycle at the same time as on a public transport. In Delhi, it is estimated that bicycles meet over 40 per cent of travel demand in journeys of a distance less than 2.5 kilometre and more than 57 per cent in less than five kilometre long trips. However, all India figures indicate that the bicycle is not quite a popular vehicle. Estimates by Transportation Research and Injury Prevention Programme (tripp) of Indian Institute Technology, Delhi show that in 1957 the bicycle transport in Delhi met 36 per cent of travel demand. By 1981, this had declined to 17 per cent and then drastically came down to just 6.61 per cent in 1994. On the other hand, scooters met only one per cent of the travel demand in 1957 but increased to 17.6 per cent in 1994.

The bicycle industry agrees that government policies have given a short shrift to the humble bicycle. It is no wonder that Indian bicycles are becoming uncompetitive. If the current trend prevails, the industry may succumb to the threat of invasion of Chinese bicycles.

According to D S Chawla, president United Bicycle and Bicycle Parts Manufacturers Association, "The bicycle industry is the only industry, which is giving the Chinese firms a tough fight in the market and this will be severely affected after the present budget proposals. With lower import duties, and higher excise Indian, Indian bicycle will be costlier than its Chinese counterpart."