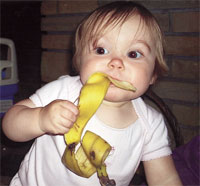 BANANA peels may be notorious for causing slips in daily lives, but they can also prevent harmful chemicals from slipping into the body. Scientists from Brazil have found that the peel of the fruit can act as a filtration medium and pull heavy metals from water.

Metals such as lead and copper get introduced in water from sources like agricultural runoff and industrial wastes. Through water the heavy metals contaminate the soil and pose health risks. Lead is known to cause cancer. Traditionally silica, cellulose, and aluminum oxide are used to extract heavy metals from water. But these remediation strategies are expensive and have side effects.

Bananas, on the other hand, till now considered a fruit waste, are a safer option. Compounds in banana peels contain atoms of nitrogen, sulfur and organic compounds such as carboxylic acids—same as those found in traditionally used material. These acids have negative charge that can bind with metals in the water that usually have a positive charge.

The team used a simple method to establish filtration properties of banana peels. They mixed 10 mg of minced banana peel (particle size 35-45 micrometres) in 10 ml of a water-based solution containing a known concentration of metals. The mixture was then filtered and had a lower concentration of the metals.

They found that a purifier made of layers of minced banana peel could be used up to 11 times without losing its metal-snagging properties. Synthetic material can be reused more times, but natural material is cheaper. In the study published in the February 16 issue of Industrial and Engineering Chemistry Research the scientists tested only two metals— lead and copper for filtration.

Castro is confident that metals such as cadmium, nickel and zinc will also be removed when they come in contact with the peel. “In fact the material can be used in industry for the treatment of effluent and will be a low-cost alternative,” he adds.