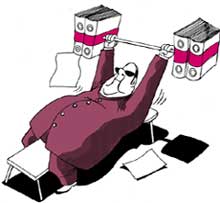 A lthough India has committed to curb non-communicable diseases, as per the recommendations of the World Health Organization (who), its policies in other sectors will prevent this from happening. This was apparent at the National Consultation on Implementation of who's Global Strategy on Diet, Physical Activity and Health held recently by the Union ministry of health and family welfare and who. The global strategy was adopted at the World Health Assembly (wha) 2004 and member states are expected to come up with indigenous strategies by May 2006 ('Fat chance', Down To Earth , May 15, 2004). India is one of the few countries to hold such a consultation, though it was a hurried affair in view of wha 2005 (scheduled for May).

Most participants in the meeting, held from April 26-27, 2005 in Delhi, were members of the scientific community and non-governmental organisations (ngos). Representatives of ministries concerned, such as agriculture, did not come, while only one representative from the large food industry, comprising thousands of companies, attended the meeting. Nevertheless, suggestions were aplenty on how to achieve a healthy lifestyle. Discussions centred upon who's recommendations that include consuming 400-500 grammes (g) of fruits and vegetables daily, increasing physical activity and ensuring food labelling. Carrying these recommendations through needs collaboration not only from industry, researchers and ngos, but also the different ministries.

It's another matter that the ministries don't work well together. The National Nutrition Policy adopted in 1993 is a case in point. Despite the involvement of the Inter-Ministerial Coordination Committee and the prime minister, the scheme has little to show in terms of results even after being in place for more than a decade.

The need for a healthy lifestyle strategy is dire but the ground situation in the country doesn't appear conducive to its adoption. For instance, consuming 400 g of fruits and vegetables is quite impossible. India's annual fruit production is 32 million tonnes, which translates into a per capita availability of 100 g per day, according to an estimate by the Technology Information, Forecasting and Assessment Council, an autonomous body under the department of science and technology. This would be reduced to about 80 g due to 20-22 per cent spoilage. The production of vegetables is around 71 million tonnes. It can be assumed that this would provide just about 200 g per person per day without accounting for the substantial amounts exported, processed and spoiled. To increase fruit and vegetable production, the Planning Commission has suggested promoting homestead farming. "For this, the initiative has to come from the government because it needs a change in agricultural practices and storage facilities," says Prema Ramachandran, director, Nutrition Foundation of India, Delhi. But a change in agricultural practices would be difficult without an assured market for fruits and vegetables.

Another key recommendation by who is ensuring enough physical activities for the people, especially schoolchildren. But physical activity is not seen as an important part of school curricula. "The crammed school timings do not allow sufficient time on the field," says Rita Jain, a lecturer with the Indira Gandhi Institute of Physical Education and Sports Sciences, University of Delhi. An activity good for everyone would be cycling but it is a risky option in the absence of separate lanes. "Big cities make cycles an unfeasible mode of transport. Instead, special tracks should be made in the same way as jogging tracks," says E P N Ribeiro, director, Association of Metropolitan Development Authorities, Delhi. When this would be done, is anybody's guess.

The consultation laid special emphasis on the role of research. For example, suggestions on reducing salt intake should be accompanied by research to ensure iodine (present in the salt) intake remains sufficient. According to Kamala Krishnaswamy, former director of the National Institute of Health, Hyderabad, more research would require setting up of more labs.

The food industry's role was critical: it was suggested that its products should be low in fat, salt and sugar. But with the sole representative from industry and none from the ministries concerned present, nothing much could be achieved. The consultation ended with the formation of several task forces -- one to coordinate the medical professionals, one on research and another one to create social awareness. Perhaps one is needed to ensure better participation next time.