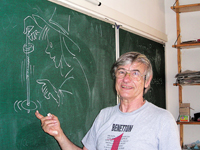 We couldn't fathom why a friendly scientist should refuse an interview, even on e-mail. And instead want to write down answers and fax them back. Having heard from Jean Pierre Petit, the renowned French astrophysicist-artist, recently on a tour to India, we now know why. Excerpts from a 12-page fascimile interview with Petit, the pen-happy former member of the Centre National de la Recherche Scientifique and creator of 'Anselme Lanturlu', the best selling series of French-language science comic books


Q. Comic strips are an unusual way of telling science. How did you get into this?
A. I wanted to draw when I was a child. I graduated into a professional very early, at 17, and started selling paintings. Later, I became a professor for sculpture. I had two parallel lives--one as a scientist and the other as an artist. For me, the two were always closely connected.I did some work in geometry and was the first to draw the "eversion of the 2-sphere", considered a sophisticated subject in mathematics but it might not make too much sense to everyone. Here I realised that the drawing technique did not really help popularise science. This inspired me to create the series--to transfer knowledge to people who do not handle equations and diagrams.

Q. What do you keep in mind while dejargonising science?
A. You can take people very far without equations. I admit that some of my comic books might necessitate the use of aspirin...they are on various levels of difficulty! But I create books for 10-year-olds, which, by the way, is much more difficult than making books for knowledgeable people. In the comic books, I mix science, humour and poetry. Laughing is the best way to learn. So I use funny scenarios to explain complex situations. If you make science funny, you win.

Q. What plagues science popularisation today?
A. The commitment among scientific organisations to take science to poor people. The rest of the socio-economic classes are more or less aware. I worked with an enthusiastic team from Pune, who have shown how one can build science in a garbage dump. They used everything from an old bicycle tyre to used plastics and devised a pump! Fantastic treasures of knowledge are hidden in wastes and the poor can make use of them with a little bit of scientific input.

Q. Students today opt for professionally-lucrative disciplines over basic sciences. Does that worry you?
A. In Europe, like in India, students are going away from basic sciences for the lure of better paying jobs. 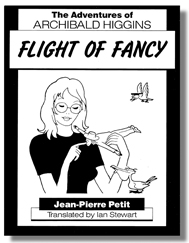 This trend must be arrested. I think governments, policy makers and in turn students ignore the recent strides in science. Here I wish to quote the example of a simple contraption capturing solar radiation to generate energy--a 300ft high solar chimney tested in Spain that traps heat and turns water into a condenser to release energy at night. Australia is planning to replicate this in the deserts, which could become fantastic sources of free electrical energy. There are dozens of such ideas waiting to be developed to provide solutions for the rising energy needs of people. Government science funding is too complicated for people who wish to take up science. Instead, scientists should form groups like, say, "energy without borders" to show that good old science still offers solutions to our most complex problems.

Q. Any new format expermient in science popularisation that you are working on?
A. My long time friend Gilles and I have created a website (www.savoir-sans-frontieres.com) from where you can download the entire comic series in over 26 languages. Gilles pays 87 translators! Now we are going to colour the black and white strips. We will also make multi-language talking files so that when you click on the icons, a 'bubble' talks back to you. This is for children to understand simple science.