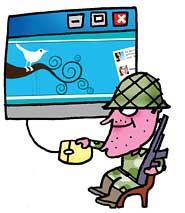 Wary of social media, US defence department has finally allowed the country’s troops to use networking sites such as Twitter and Facebook. Department officials say the benefits of using social media outweigh the risks to security.

The decision means websites blocked by the Pentagon in 2007—including YouTube—will be unblocked. However, commanders will be able to temporarily block access to safeguard missions.

The US military does use the web for recruitment, public relations and communications between soldiers and their families. But social networking sites were taboo for those on active military service. Defence Secretary Robert Gates said social networking can help the Pentagon interact with US military employees. In recent times, the US Southern Command used Twitter for operational updates on relief activities after the Haiti earthquake.

“The idea is to be responsible,” said David Wennergren, deputy assistant secretary of defence for information technology.