People goaded to save their forests

Fed up with government inaction on mining and deforestation in the Aravallis, the people of the region are taking it upon themselves to end the degradation. 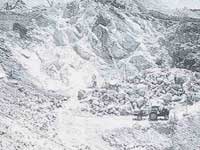 THE PEOPLE of the Aravalli region are tired of waiting for the authorities to rescue their habitat from destruction caused by unbridled mining and deforestation. In November, about 300 villagers from Rajasthan, Gujarat and Haryana reached New Delhi after undertaking a padyatra to spread awareness about the issue.

Rajendra Singh, convenor of the Tarun Bharat Sangh who led the Aravalli Chetna Yatra, said, "It is a strongly held belief of the people in this region that their prosperity is due to the greenery of the Aravallis, which is being eroded."

However, attempts to regulate mining in the region have been resisted by the mining mafia, which enjoys political support. Most state-level politicians support mining, saying it is a valuable commercial activity that is helping in the development of the state.

According to Singh, until about 30 years ago, pastoralists (herders of sheep and cattle) used to migrate to the Aravalli belt. But now, because the hills are barren, the people here cannot even sustain themselves.

Says Singh, "It is the people who will have to take charge to save their forests -- there's no other way out. Hence this yatra, which is the first step in the ultimate sovereignty of the people on their forests. The fight has started now."