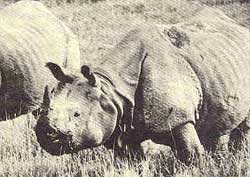 HELPLESS against the degradation of forests, the Assam forest departwent is enlisting "people's cooperation" against encroachers, poachers and political extremists. The department has set up joint forest management committees that will involve local people. The committees will take on plantation work as well as protect the forests and receive a share of the benefits in payment. The state is planning to include forest protection in the Eighth Plan and strengthen its forest protection forces.

Despite intensive patrolling, at lug 90 rhinos died in the Kaziranga National Park last year, 35 of them Itilled by poachers for their horns terrect to be unicientitleci, is because forest custodians are often hand-in-glove with poachers and manipulate rhino population figures so as to cover up the extent of their slaughter.

Most of the encroachment into the 7,562-ha Rajiv Gandhi Wildlife Sanctuary is said to be by immigrants who have settled on a huge char (island) formed where the Brahmaputra splits into two streams in north-central, Assam. Forest officials contend that unless these settlers are evicted from the char, the flora and fauna of the sanctuary will be lost irretrievably. But the eviction could not be carried out due to political pressures.