With the Vatican already on the offensive and various unresolved rifts, fireworks are definitely on the agenda of the upcoming population conference in Cairo 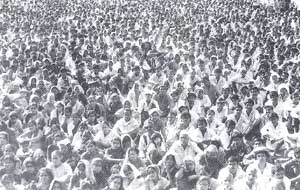 ACTION-packed days seem lined up for delegates at the 9-day International Conference on Population and Development (ICPD) at Cairo early this month. Although there is general unanimity on overall objectives - the management of rapid population growth, increasing environmental degradation and pervasive poverty - dissensions that marred the preparatory committee meeting in New York in April threaten to resurface at Cairo.

The Vatican has already signalled its intention to renew its anti-abortion offensive. Uncomfortable at the prospect of more abortions, spiralling birth control and breakdown in the traditional family structure, the Holy See issued doomsday warnings about "the future of humanity" being at stake. Pope John Paul n's stand-off with the us administration and feminist groups is, therefore, a potential flashpoint.

Any hopes of a consensus between the 2 sides are likely to be dashed to the ground by the Vatican's sharp criticism of excerpts from the conference's preparatory documents, which use phraseology such as "sexual health" and "reproductive health". Says an acerbic Vatican statement issued in August, "We are interested in a consensus on the true well-being of men and women, not in a consensus on words and, even less, on slogans."

Then, there are the rumblings of disgruntled Southern nations about the North's propensity to use the population control bogey to maintain its economic and ecological status. Environmental degradation, the South believes, has less to do with overpopulation than with the consumption-oriented lifestyles in the industrialised world. The developed world accounts for a mere 20 per cent of the population, yet gobbles 80 per cent of the world's resources. A reduction in population would do little to set right the balance.

But the preamble of the ICPD'S draft programme of action seems to set a tough tone for what is to come at Cairo. "The growth of the world population is at an all-time high in absolute numbers, with current increments exceeding 90 million persons annually...the transition from the fifth to the sixth billion, currently under way, is expected to be completed by 1998."

According to United Nations projections, by AD 2050 the world population could vary between 7.8 billion and 12.5 billion. The Cairo summit's proposed 20-year programme, out-lined in New York, aims at stabilising the population at the lower figure.

The conference's success will hinge on getting international support for the strategies proposed to attain this objective. The term "family planning." makes most Third World women's groups see red, because of its suggestion of coercion and emphasis on targets. Also, the Vatican has registered its vociferous opposition to birth control.


However, for the first time there seems to be a consensus - reflected in the run-up meeting to Cairo - that family planning should be part of a broader approach that aims at meeting the reproductive health needs of women. The objective is to ensure that men, women and adolescents have access to comprehensive information about "a full range of [reproductive and sexual health] care services, including family planning" and are in a position to take voluntary decisions about child-bearing and fertility regulation methods.

The holistic approach is also apparent in the attempts to incorporate population concerns in national and international efforts to achieve equitable, sustainable development - although perhaps not always to the satisfaction of the Third World. At New York, for example, Algeria on behalf of the Group of 77 and China called for greater emphasis on the alleviation of poverty - a theme that several other developing nations quickly took up. A less contentious issue will be empowering women to eliminate all forms of gender bias. "Experience shows that population and development programmes are most effective when steps have simultaneously been taken to improve the status of women," the draft points out. Among the proposals that will be discussed are greater representation for women in the political process, greater education, better health care and equal access to the labour market.

Hopes are obviously pinned high on this front. Nafis Sadik, ICPD secretary-general, goes as far as to voice optimism that the final Cairo document "will serve as a liberating force for women throughout the world and as one of the cornerstones of the social and economic planning for the 21st century".

This, off course, can come about only if the conference proceeds according to agenda and does not disintegrate in the witches' brew of heated polemics that is realpolitik today.