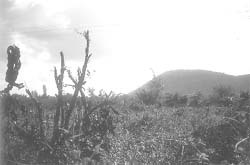 chief minister of Andhra Pradesh N Chandrababu Naidu has recently warned that if found guilty for destruction of forests, the offending forest officials would be booked under the Prevention Detention Act. He was addressing a state-level conference of presidents and secretaries of Vana Samrakshana Samiti's (vss) in the state capital Hyderabad. He asked the officials to apprehend offenders felling trees in forests and hand them over to the authorities. He said that vss has already been given power in this regard.

The vss members are entitled to 25 per cent of the compounding fee collected from offenders as an incentive for good work done by them. The conference was organised to inform the vss members about the policy of joint forest management. So far, vss were constituted in 6,271 villages out of 6,806 villages identified for the purpose. There were only 200 vss in 1995, he said. According to Naidu, 15 lakh people, including seven lakh women, have a stake in the forest resources.