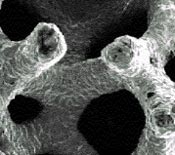 a spin-off from space research has allowed a us company to grow normally a large number of stem cells. The cells grew on a metal matrix, which was originally used to help rockets blast into space. The matrix was made by coating a carbon skeleton on metals at very high temperatures. It looks like a hard piece of sponge but under a microscope it is indistinguishable from the bone marrow. "When you add body stem cells to the matrix they grow in three-dimension, the way they normally do in the body," says Michael Rosenzweig, chief scientific officer of the us-based company Cytomatrix, which has developed the technology.

Because the matrix mimics the natural environment of the body, stem cells grown on it secrete their own growth factors. This means they can multiply and also retain their characteristics. Previously, when scientists tried to grow stem cells outside the body, growth factors were added to make the cells divide. While this led to an increase in the number of cells, it also caused them to lose valuable properties such as the ability to turn into any cell type.