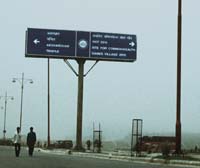 on january 22, 2007, the Union ministry of environment and forests (moef) gave permission to construct permanent structures on the Yamuna riverbed for the Commonwealth Games 2010 but only after fulfilling a clause. The Delhi Development Authority (dda), looking after the project, will first have to ascertain the risk of flooding in upstream areas due to the new bund (embankment) constructed in 2000.

moef had cited 34 environmental considerations in response to an application for environment clearance by dda in December 2006. The clause that hampered the project was: "As far as possible the work should not be of a permanent nature."

The Yamuna riverbed in Delhi covers an area of 9,700 hectares (ha) of which 1,600 ha is underwater and 8,100 ha is dry land. There have been repeated attempts to develop this sizeable real estate. The Akshardham temple, constructed in 2005 over an area of 23 ha, had attracted its share of controversy (see 'Master violators', Down To Earth, September 15, 2004).

Environmental groups have long been protesting the encroachment of the riverbed. "The Yamuna flood plains are the most copious aquifers in the city. Any construction on it will adversely affect groundwater recharge," said Manu Bhatnagar of the Indian National Trust for Art and Cultural Heritage. He added: "The Delhi Jal Board has constructed 13 'Renny' wells on the riverbed area in Palla (upstream of Wazirabad barrage) which is used to supplement their regular supplies."

Recent media reports claim dda has commissioned Pune-based Central Water and Power Research Station to do the study by February 20, 2007.