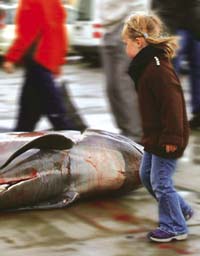 researchers from usa and Denmark have confirmed an association between increased exposure to persistent organic pollutants (pops) like polychlorinated biphenyls (pcb) and decreased antibody production in children vaccinated against tetanus and diphtheria. Action against pops was initiated in the early 1970s. The Stockholm Convention, banning use of pops, was signed in May 2001 but they are back in news again.

The researchers studied 240 children in the North Atlantic countries. Traditional diet in the area includes whale blubber, a possible source of pcb contamination. The researchers determined the children's exposure to pcbs by measuring their concentration in their mothers' blood during pregnancy and milk soon after birth, and then in the children.The group found that for each doubling of pcb exposure, diphtheria antibody response decreased by 24 per cent in the 18-month-old children. A 16 per cent reduction of the tetanus antibody response was seen with each doubling of exposure in seven-year-old children. Both prenatal and postnatal exposure seemed to significantly affect antibody concentrations.

It was found that about 20 per cent of the children, who were seven years old, did not have protective levels of antibodies against diphtheria, says Philippe Grandjean from the Harvard School of Public Health, Boston. Grandjean says that revaccinating the children with low antibodies would help.

"These substances are very stable and remain in the body for a long time. The mother may pass them on to the child in the womb and also via breast-feeding. Most agencies have not considered milk contaminants in regard to recommendations for breast-feeding but our findings suggest that long-term breast-feeding may not be advantageous for the child if the mother is highly exposed to pcbs," says Grandjean. The findings were published in the August issue of the journal Public Library of Science (Vol 3, No 8).
pcbs consist of two benzene rings attached to chlorine atoms. Depending on the number and position of chlorine atoms, 209 pcb congeners (kinds) can be formed. pcbs have insulating and nonflammable properties and are used as heat exchange and dielectric fluids in transformers and capacitors; hydraulic and lubricating fluids; plastic; extenders for pesticides; and as ingredients in paints, adhesives and flame retardant.

The effect of pcbs has been studied on the immune system, both in human and animal models. Most of the information on effect of pcbs on immune system comes from Taiwan where people accidentally consumed rice bran oil contaminated with pcbs in 1979. Children from this region have higher frequencies of bronchitis and respiratory tract and ear infection. A study carried out in the Netherlands and published in the April 2004 issue of Toxicology Letters (Vol 149 No 1-3) showed that exposure to postnatal pcb in Dutch school children was associated with a higher prevalence of recurrent middle ear infections. A higher prenatal pcb exposure was associated with shortness of breath and wheezing, as assessed by an accompanied questionnaire addressed to parents.
The risk of exposure is especially high in developing countries like India where these hazardous materials make their way innocuously into households. Though pcbs are not manufactured in the country, it makes its way in through the waste and products imported into the country. A 1996 World Bank study, Management of PCBs-India, estimated that approximately 2,000 to 4,000 tonnes of pcbs exist in India but there is no inventory of the substance in the country. For example, pcbs are released from the ship breaking industry, thermal power plants and cement factories.

"The decommissioned transformers are generally sent to scrap dealers who remove the oil for recycling. This oil then makes its way to rural areas where people suffering from arthritis use it as massage oil. Once inside a household, the chances of pregnant women getting exposed to the oil and pops are high," says Upasana Choudhry, senior coordinator of the chemicals and health unit of Toxics Link, a Delhi-based ngo.

The International pops Elimination Network, in a study, assessed the amount of pcbs in eggs collected from sites where unintentional contamination was possible. The results showed that the amount of pcb in samples collected from a medical incinerator in Lucknow was 4.7 times higher than the limit of 2 pictograms per gram proposed by the eu. But pcbs are not considered a priority in India. There are no analytical facilities and there is no monitoring done either. Also, there are no safe storage sites for pcbs.