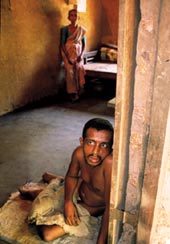 a review of worldwide research on human reproductive disorders related to organochlorines (ocs) indicates that a global ban on the harmful chemicals is a must. ocs are compounds that alter hormonal functions of humans, thereby adversely affecting reproductive organs, and the health of newborns. Some ocs rampantly used are ddt, polychlorobiphenyls (pcbs) and dioxins.

Gunnar Toft and colleagues of the Aarhus University Hospital, Denmark, conducted the review. They analysed 408 studies from countries that have banned ocs as well as those that are still using the chemicals. Since the 1970s, most European countries, the us, Japan and the erstwhile Russia have banned the use of ocs. However, their impact still persists in these nations. Most importantly, the effects are identical to those observed in countries still using the toxic compounds.

A strong correlation was found between exposure to ocs -- especially ddt and pcbs -- and all the adverse outcomes. For instance, a comprehensive us study conducted between 1959 and 1966 (when ddt was still being used) indicated a strong relationship between ddt concentration in maternal serum and pre-term delivery, low birth weight and growth retardation of newborns. Things did not change much even after 30 years of ban on ocs -- research undertaken in 1998-2000 revealed that the same problems persisted; pcbs and ddt exposure also increased the risk of cancer of female reproductive organs.

During another study, researchers from the University Hospital, Sweden, studied the affects of the following ocs: pcbs, hexachlorobenzene, chlordanes and dichlorodiphenyldichloroethyelene (dde). They found that despite Sweden banning these ocs in the 1970s, in 2003 many newborns were suffering from testicular cancers because their mothers had very high concentration of the chemicals in their lipids. Of the 61 children studied, 44 had testicular cancer, and the oc exposure levels of their mothers ranged between 0.2 to 3,339 nanogrammes of the chemicals per gramme of lipid.

Why are the health effects rampant despite the ban? The scientists cite contaminated seafood as one of the major sources of exposure to date. ocs accumulate in the environs and magnify, thereby persisting in the food chain for decades. They can easily accrue in the fatty tissues of sea organisms. A study conducted in 1995 among fisherfolk communities of the Baltic Sea showed that women's intake of contaminated seafood was inversely proportional to the birth weight of their babies.

Even in developing countries, which use ocs rampantly for various purposes such as manufacturing paints, the exposure is mainly via contaminated foodstuff -- vegetables, fruits and milk. The health impacts are also widespread. For example, a study by researchers from us-based Harvard School of Public Health shows that the chances of spontaneous abortions in China rose with increasing concentrations of dde and ddt in the mothers' lipid.

The review indicates that a worldwide ban is the only way out. "If developing countries continue using ocs, the impacts would be more pronounced and fatal in the future than what they are at present. A worldwide ban means a less toxic legacy," concludes Toft.