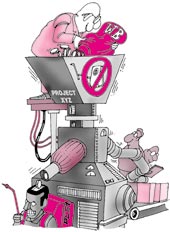 op 4.09 requires World Bank projects and policies to reduce farmers' reliance on pesticides and promote integrated pest management (ipm). The policy also bans the use of Bank funds for procurement of the most hazardous pesticides. But The Persistence of Pesticide dependence: a review of World Bank projects and their compliance with the World Bank's Pest Management Policy, 1999-2003 reveals that the wb has seriously fallen short on promoting ipm, and that wb funds for agricultural and rural development continued to exacerbate dependence on pesticides.

The other panna report -- The Struggle to Reduce Reliance on Pesticides: can community-based monitoring improve policy compliance? -- documents the experiences of non-governmental organisations (ngos) in Indonesia, China and Mexico in monitoring World Bank projects, with a focus on pesticide use and pest management practices. In all three countries, panna and its ngo partners found wb projects not complying with op 4.09. "Rather than helping farmers reduce their reliance on pesticides, the projects either supplied 'technology packages' that included pesticides or placed no restrictions on the use of World Bank funds to purchase pesticides".

Since December 1998, wb has financed 107 projects. Only 9 per cent of these effectively incorporated ipm practices and were likely to comply with op 4.09. Shockingly, none of the available project documents mention the hazards associated with pesticides, or plans to implement ipm. Ironically, certain projects actually pave the way for increasing pesticide use. "The Ghana Agricultural Services Subsector Investment Project aims to 'remove bottlenecks' from 'policies, rules and regulations governing the generation, importation, and distribution of (...seeds...), herbicides, pesticides and veterinary drugs...' in order to facilitate access to those inputs," reveals panna.

Creation of this project followed a staff exchange, in the late 1990s, between the Bank and the French agrochemical company, Rhone-Poulenc Agro (now Aventis), intended to foster the wb's work with private sector partners in West Africa. This created a conflict of interest: "Rhone-Poulenc Agro used its relationship with the World Bank to promote its pesticide products and break into new markets in West Africa," notes panna. "In Senegal, pesticides used on tomato were replaced by Rhone-Poulenc pesticides, and the frequency of application was further increased. Some of the products were not permitted for use on tomato in the eu or the us".

In Indonesia, panna and Yayasan Duta Awam, a local ngo, monitored the us $65-million Integrated Swamps Development Project, jointly funded by the wb and the Indonesian government. "Farmers' investigation uncovered extensive problems in the project, including a massive increase in the use of and dependence on chemical pesticides, a violation of the wb's policy on pest management. Before the project began, farmers' use of pesticides was limited, but this expanded rapidly once the Bank began providing pesticides through its distribution of fixed input packages. Project documents stated that the ipm training would be provided, but the training that farmers actually received focused on how to use pesticides," says panna. Monitoring also found that pesticides of the wb project were being illegally sold in local markets and that no training was given on the harmful effects of pesticides.

"Sometimes it seems like World Bank officials live in a different world, a world where they cannot see us and the daily reality that people face. I wonder how they can believe the official reports (they get from Bank project staff) when serious problems in a project are so easily covered up," says Nila Ardhianie, lead monitor in Indonesia.