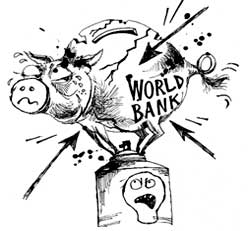 IN SPITE of the worldwide controversy over the continuing use of pesticides, the World Bank (WB) has diluted its norms related to pesticides and pest management policy. The wb's attitude was roundly criticised by a group of over 100 environmental, consumer and developmental organisations belonging to different countries on the eve of the World Food Summit at Rome.

The Bank's earlier policy made it mandatory for the staff to promote an ecologically sustainable approach and to minimise pesticide use. This approach meant that instead of chemicals, predatory insects were used to eat crop-damaging insects, while farmers were given lessons on ecological management and were encouraged to develop locally appropriate pest control methods that blend tradition with modern science. This July, however, wb changed its policy to one that "takes a weaker stance on the environmental assessment of pesticides, by adding a phrase which allows pesticides to be considered safe if they have passed a pre-existing environmental assessment", according to Mimi Kleiner, a policy analyst at the Washington-based Environmental Defence Fund. In other words, "field conditions -- that specify how pesticides are applied, the quantity used and other parameters -- which can make all the difference about whether pesticides are safe for surrounding communities do not have to be taken into account", observed Kleiner.

WB's critics are worried about the change of the old pesticides policy, known officially as Operational Directive 4.03 to a new Operational Policy 4.09, as the new directives are not binding. The old rules contain mandatory provisions for enforcement by the wb personnel, which have been included in the 'good practices' guidelines which the staff are required to follow. Citing the World Health Organization's statistics, Marcia Ishii-Eiteman, senior programme coordinator at the Pesticide Action Network's north American regional centre said, "Pesticides cause over three million severe poisonings and 220,000 deaths a year, and most of these incidents occur in developing countries where chemical products are aggressively pushed by industry, often with national and international support, in the guise of development aid." Ironically, the wb vice president, Ismail Serageldin, addressed the recently concluded World Food Summit in Rome about the agency's commitment to rural well-being. Argue the critics, that instead of promoting the interests of the poor, the Bank was actually being indifferent to the condition of poor farmers or the environment by lowering the pesticide norms.

It is also believed that wb introduced its new policies in order to lessen its own pressure to fulfill the conditions laid down in the previous guidelines. An internal Bank memo testifies to the fact that the setting up of an independent inspection panel to look into alleged violations of Bank policy means that "We (wb) have to be careful in setting policy that we are able to implement in practice". According to Kleiner, this admission means that "rather than making an effort to live up to its own guidelines, the Bank appears to be lowering its standards".