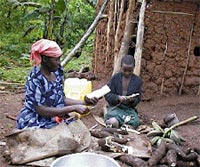 A threat to food security looms large over east and central Africa. The insect which causes the cassava mosaic disease is rapidly spreading around the western side of Lake Victoria in Tanzania and parts of Congo. Experts warn that the affliction is threatening the livelihoods of many people whose daily intake of food mainly comprises cassava.

However, a campaigner against the disease, James Legg, said a highly resistant cassava strain had been introduced and farmers had reported good results. He added that more than 9,000 hectares were under the new variety in western Kenya. Tests were also being conducted in Uganda and Tanzania on other high-yielding and resistant varieties, he revealed. The director of the Kenya Agricultural Research Institute in Kakamega, Omari Odongo, said the government was determined to improve crops such as cassava which require minimal inputs. Odongo said more than 600 million people in sub-Saharan Africa, Asia and South America were dependent on cassava.