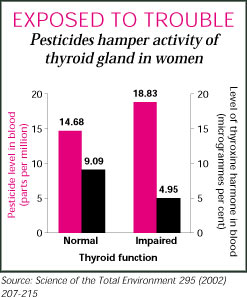 women exposed to pesticides such as ddt and dieldrin are more likely to have hypothyroidism -- a situation in which the thyroid gland is unable to produce requisite hormones for carrying out various metabolic processes. This leads to problems such as weight gain, lack of energy and falling hair.

These were the findings of a study carried out by a group of researchers at Sawai Man Singh Medical College and Hospital in Jaipur. Endocrine disrupting effect of pesticides is well known, as the chemicals are structurally similar to the thyroid hormones. It affects their functioning by binding to sites where the hormones normally bind.

The group studied exposure to pesticides in 123 women who had come to the thyroid clinic of the hospital during 1997-98. The group found that the women could be divided into two groups -- one having normal thyroid function and the other having a lower thyroid function. The women who had a lower thyroid function had higher level of organochlorine pesticide residues in their blood samples. Specifically, level of dieldrin, used both in agriculture and health protection programmes, was high. However, none of the women above the age of 50 years were found to have lower thyroid activity. According to the researchers, the older women might have lost the accumulated pesticides during the process of lactation and menstruation.