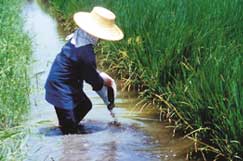 a research team from Calcutta University has discovered that Sumidon - 40, an organophosphate pesticide, disrupts the reproductive performance of Koi (Anabas testudineus), which breeds in the rainy season in water-logged paddy fields of West Bengal. The scientists claim that several fish species in the state are endangered due to overuse of pesticides, water pollution and overfishing.

To study Sumidon-40's effect, the team took brood fishes (fishes in breeding stage) of A testudineus , which were exposed to sublethal (0.025 millilitre/litre) and half (0.25ml/litre) of lethal doses of the pesticide up to 10 days. Using a technique called flow cytometric analysis, the effects of pesticide on ovary cells and testes cells during different exposure time (overnight, five days, 10 days) were studied. Gradual increase in pesticide exposure increased cell death and decelerated dna synthesis in ovary as well as testes cells compared to controls (not exposed to pesticide). The compact structure of fish eggs became brittle and the brittleness increased with increased doses of pesticide.

"The pesticide has decimated the wild population of this fish at an alarming rate making it an endangered fish," says Sumit Homechaudhuri, who led the research team. The findings appeared recently in the Journal of Freshwater Biology (Vol 16, Nos 1-4).

Another research team, from Kolkata's office of the deputy director of fisheries (microbiology and parasitology), government of West Bengal, warns that 39 local fish species may disappear from their natural habitat.

Studies across India show that about 88 fish species in Western Ghat streams and 82 species in Eastern Himalaya are threatened. One of the main culprits responsible is the mindless use of most pesticides.

A way to save endangered fishes is through induced breeding, say scientists from Calcutta University. They compared the performance of carp pituitary extract with ovaprim, a synthetic hormone, on the reproductive performance of A testudineus, and found the former works better.