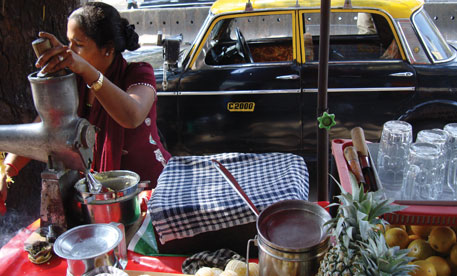 PESTICIDES SPRAYED in farms find their way into fruits, packaged juices and drinking water. Techniques used to detect the contamination are costly, time consuming and require volumes of organic solvents. v Now a group of researchers has developed a technique that costs Rs 35 and takes only 60 minutes to detect contaminants. What’s more, it is the first technique that can detect chemicals in multi-component mixtures.

It can isolate traces of pesticides, dioxin-like polychlorinated biphenyls (PCBs) and polycyclic aromatic hydrocarbons (PAHs) in water-based samples, say scientists from National Research Centre for Grapes in Pune, University of Pune, Shivaji University in Kolhapur and Kalinga Institute of Industrial Technology in Bhubaneswar. “It can come handy in monitoring chemicals in market samples.”

The technique employs gas chromatography, which separates and analyses compounds that can be vapourised without decomposition. It then uses time-of-flight mass spectrometry in which pesticide ions are accelerated under electric field to detect and identify pesticides.

For the study, the researchers prepared samples using 140 pesticides and 25 contaminants such as PCBs and PAHs in water. They then prepared water-based samples of fruit juices (including apple, lemon, pineapple, orange and pomegranate). Both the type of samples were extracted using organic solvents, like chloroform and dichloromethane. The technique could detect minute amounts of PAHs and pesticides in water samples, ranging between one and 250 nanogram per litre. Residues of dinitro-octyl phenol were detected in two samples of pomegranate juice. The team also found residues of pesticide chlorpyrifos in grape juice. Exposure to chlorpyrifos during prenatal period can cause decline in intelligence quotient and working memory in children.

The method successfully identified 165 contaminants in six different fruit juices and water samples, says lead researcher Kaushik Banerjee. The study has been published in the September issue of Journal of Chromatography A.

The fact that the technique could identify 165 contaminants is a significant development. The technique could be extended for detecting harmful chemicals in soft drinks, says Subhas C Santra of Kalyani University of West Bengal. “It will offer a baseline data for further market survey aimed at detecting pesticide residues in fruit-based products,” he adds.