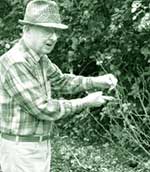 a european study reveals a link between pesticides and Parkinson's disease (pd), claiming the greater the pesticide exposure, the higher the risk of developing the ailment. pd is an incurable, degenerative neurological condition where people have difficulty in moving their limbs and develop tremors and facial tics.

A survey of around 3,000 people shows high-level users of pesticides, such as farmers, are 43 per cent more likely than non-users to develop pd. Even low-level users of pesticides, such as amateur gardeners, are 9 per cent more likely to develop the disease. These results are part of the yet-to-be published Geoparkinson study, funded by the European Commission and carried out in Scotland, Italy, Sweden, Romania and Malta.

The researchers studied 767 people with pd and 1,989 matched healthy controls. Detailed estimates of the occupational exposure to pesticides, solvents and metals were taken. The frequency of use of these agents, the ventilation conditions and the use of protective equipment were also investigated. Only jobs or hobbies giving more than six months exposure were assessed. Information on smoking history and family background was also gathered. "The study considerably strengthens the case for pesticides being relevant to occupational risk of Parkinson's disease," says Anthony Seaton of the University of Aberdeen, uk , the principal investigator of the study. The scientists also studied genetic aspects of pd such as genes coding for enzymes involved in breaking down toxins. The group suggests even gardeners should use protective clothing.

While pd has been linked to the use of pesticides, the researchers were not able to pinpoint the exact pesticide responsible. "There are difficulties in retrospective estimation of exposure, changes in the commonly used pesticide types over time and the tendency for people who use one pesticide to start using other pesticides, too," says Finlay Dick, department of environmental and occupational medicine, University of Aberdeen and a team member. Information on effects of specific pesticides would enable harmful chemicals to be removed, feel experts.

The link between pesticides and pd has always been suspected but not proved conclusively. Earlier studies have linked the disease to agricultural employment, well water usage and rural residency. These factors could just be surrogate markers for exposure to pesticides. Meanwhile, researchers at the Environmental and Occupational Health Sciences Institute, Robert Wood Johnson Medical School, usa , have shown exposure in childhood can lead to the disease in adults. Their findings were based on experiments with mice.