With their reputation at stake, the soft drinks industry started a major public relations offence. After decades of some of the most glamorous and high-profile lifestyle-selling ad campaigns, it has now resorted to assuring its customers that its products are safe 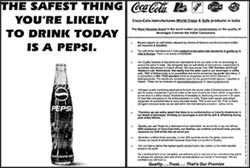 pesticides in soft drinks
On August 5, six months after releasing a study on the presence of pesticide residues in packaged drinking water, the Pollution Monitoring Laboratory of the Centre for Science and Environment (CSE) made public its report of finding pesticides in 12 leading cold drinks brands in India (See : "Colanisation's dirty dozen", August 15, 2003).

toxic fallout: As expected, the news made headlines, both in the domestic and international press. Coke and Pepsi are big names, and any controversy involving them is bound to make big news, even if it comes at the expense of the main focus -- that of unregulated pesticide use and the lack of government norms in India ("Wrong focus", The Economic Times, August 7). All major publications took up the issue, many of them calling the soft drinks giants irresponsible and accusing them of double standards, as the CSE report had also pointed out that Coke and Pepsi brought in from the US did not contain any pesticides ("Cola toxins: full flow in India, tight leash abroad", Indian Express, August 7). A lot of newspapers also took a dig at the endless celebrity endorsements and relentless media campaigns that the two brands resort to ("Coke, Pepsi: Hum besharam hain", The Asian Age, August 7)

in the meantime: With their reputation at stake, the soft drinks industry started a major public relations offence. After decades of some of the most glamorous and high-profile lifestyle-selling ad campaigns, it has now resorted to assuring its customers that its products are safe. Both companies have released "data" that they say support their claim of the purity of their products. They have also come out with advertisements in daily newspapers and put up signs and campuses and retail outlets assuring customers of the safety of their products.

When CSE released its report, it stated that it is ultimately the government that is responsible for the weak regulatory framework for soft drinks industries. The issue here is not big multinationals doing business in India, but the lack of adequate government norms and regulations.