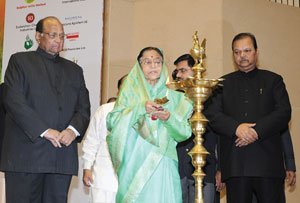 THE timing and the message of the conference could not have been more stark. At a time when the endosulfan problem is in the limelight, sparking calls for a nationwide ban on the pesticide, its manufacturers staged a remarkable feat.

They held a three-day conference on rural prosperity at Delhi’s Vigyan Bhavan, venue for high-power official meetings, and put across the message that the hazardous chemical is safe. Their biggest coup: roping in President Pratibha Patil to inaugurate the event.

Organised by Crop Care Federation of India (CCFI), the association of the 45 leading pesticides manufacturers, the conference had both the Ministry of Agriculture and the Ministry of Chemicals and Fertilizers as partners for the three-day conference in December.

The high-profile event also roped in related industries: seed, fertiliser and processed food. It was a powerful showing with leading sponsors such as Monsanto India, Excel Crop Care and United Phosphorus (UPL) along with the association of the biotech industry (ABLE) and the National Seeds Association of India.

Excel Crop Care is a subsidiary of Excel Industries, the leading endosulfan producer, and a sister concern of UPL. With the campaign against endosulfan gaining momentum in Kerala, it is obvious why the pesticides lobby was keen to organise such a seminar. It claimed “rural prosperity through better agriculture” as its theme but the conference had minimal participation from the farmers: just Sharad Joshi, president of Shetkari Sanghatana of Pune.

Krishi Bhavan, headquarters of the agriculture ministry, had no convincing argument to justify its partnership with CCFI, which is chaired by Raju D Shroff, chairman and managing director of UPL. Agriculture minister Sharad Pawar, the main speaker, focused on the pet theme of the ministry: increasing private sector participation in agriculture services. He said the new momentum in Indian agriculture meant “the private sector has a critical role in meeting the demand of higher investment, inputs and services in agriculture”. Kerala, though, was incensed by the open display of cosiness between the endosulfan lobby and the government.

The strongest criticism came from Congress stalwart V M Sudheeran who has been in the forefront of the campaign against endosulfan. “When the country is asking for a ban on the hazardous pesticide, I am completely at a loss to hear the Ministry of Agriculture had organised an agricultural development seminar sponsored by none other than the producers of endosulfan,” he wrote to Pawar.

Sudheeran, a former member of Parliament, is a highly regarded member of the Kerala Pradesh Congress Committee. His letter summed up the shock and anger such an event has occasioned, more so since it was used to promote endosulfan. “The irony is that when at least 1,000 people have been killed by this chemical and more than 8,000 people seriously impacted in the villages of Kasaragod, the pesticides industry has used the good offices of the ministry to unleash its propaganda that endosulfan is a safe chemical.”

He was referring to the fact that Arun V Dhuri, vice-president (registration & business development) of Excel Crop Care, had facilitated the discussion on the “truth and falsehoods and remedies” regarding pesticides and had used the occasion to depict endosulfan as harmless.

CCFI, formerly Pesticides Association of India, puts the total value of agro-chemicals produced in the country at Rs 13,000 crore, of which exports account Rs 7,000 crore. A recent report by Rabobank, which pegs the production of pesticides at Rs 7,000 crore, says 50 percent of the domestic market is controlled by multinational corporations.

The event was also used for pushing genetically modified (GM) crops. According to CCFI, one of the key aims of the conference was to promote technological innovation. “If a second Green Revolution is to ramp up food production, quicker green signals are needed on GM,” it said.