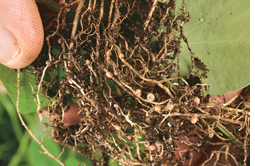 pesticides have so far been touted as protectors of plants.

For the first time, a new research says some of them may actually be harming the very crops they are supposed to protect. Reason many of them cut off the communication between crops and nitrogen fixing bacteria and are a threat to natural nitrogen fixation. Result decrease in crop yields.

Researchers at the University of Oregon conducting tests on 50 pesticides found that at least 20 of them blocked connections to specific receptors inside the symbiotic rhizobium bacteria which live in the root nodules of leguminous plants in the soil, thus disrupting nitrogen fixing, the main function of such bacteria.

Legumes secrete chemical signals that attract these bacteria, which work with the plants to convert atmospheric nitrogen into ammonia, which in turn is used as fertiliser by the plants.

"In our study, the chemical component pentachlorophenol (pcp) caused the strongest inhibition for symbiotic nitrogen fixation resulting in the lowest plant yields. In addition, pcp was the only chemical that negatively affected seed germination," Jennifer Fox, the lead author of the paper told Down To Earth. pcp, which is sold as pentachlorol and chlorophen is used as insecticide, herbicide and algaecide.

She, however, stressed that none of the chemicals was toxic to either the plant or the bacteria and that pcp was unique in that it inhibited both seed germination and nitrogen fixation.

The most common explanation for this was the overuse of agrichemicals in legumes. This reduces the legume's natural need for nitrogen fixing.

Besides, poor soil quality due to overuse strips nutrients such as nitrogen and phosphorous, as also tillage, which interrupts root structures and disturbs bacteria when soil is turned.

"We showed that by applying pesticides that interfere with symbiotic signaling, the overall amount of symbiotic nitrogen fixation is reduced. If this natural fertiliser is not replaced by synthetic nitrogen fertilisers, crop yields go down. Or the crops need more growing time to match yields of untreated crops. This is an unforeseen contributor to declining yields," Fox said.

"This sets up a vicious cycle because the more synthetic nitrogen fertiliser we add to the soil, the less symbiotic nitrogen fixation will occur," she added. The study comes as a blow to a recent report by assocham, which had concluded that pesticides were the ultimate solution to make up annual crop losses in India.

A study by the Central Rice Research Institute at Cuttack in Orissa published in Current Science in 1980 showed that treatment of rice fields with the pesticide pyrethrin reduced nitrogen fixing ability of rice fields by 80 per cent.