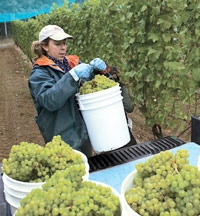 Long-term exposure to pesticides dulls the human brain. In fact it can even be linked to onset of dementia. Scientists at Victor Segalen University, Bordeaux, France studied 614 vineyard workers from the region. The intellectual capacity was monitored for six years as part of PHYTONER study.

Around 1,000 workers enrolled in the study between 1997 and 1998, 614 of whom were monitored between 2001 and 2003. Both the times they filled in a questionnaire and underwent nine neurobehavioural tests designed to measure memory recall, verbal skills and reaction time speeds.

A comparison of the two results showed that subjects who were directly exposed had a lower score in the follow up. It was seen the subjects in the directly exposed group had twice the probability of scoring lower in the Mini Mental State Examination—commonly used to screen dementia patients. These subjects also had five times higher chance of scoring the lowest. “The study adds some data to the hypothesis of presence of neurobehavioural effects of pesticides. But the term pesticides is too generic,” said Claudio Colosio assistant professor with University of Milan, Italy.

The PHYTONER study is the first to provide prospective data on the natural history of neurological disorders associated with pesticide exposure. The study was published online in the December issue of Occupational and Environmental Medicine. The workers had a minimum 20 years’ experience in agriculture. Their habits like alcohol consumption, smoking and psychotropic drug along with age, education and nationality were also considered.