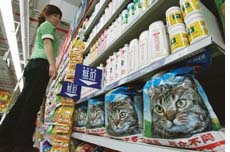 Investigations into the recent deaths of dogs and cats in the us after eating pet food have made some headway. The deaths have been linked to a chemical derived from coal, which has for long been mixed in pet food manufactured in China. About 60 million packages of pet food were recalled after they were found to have melamine. The chemical is said to have killed at least 16 pets and sickened about 14,000 pets in the us.

Melamine looks like protein. But it does not have any nutritional value. Agricultural workers in China openly say that, for many years, the chemical has been secretly added to animal feed, as a fake protein.

"Many companies buy melamine scrap to make animal feed," said Ji Denghui, manager of the Fujian Sanming Dinghui Chemical Company in Fujian, which sells melamine. "There is no regulation to check it," he added.