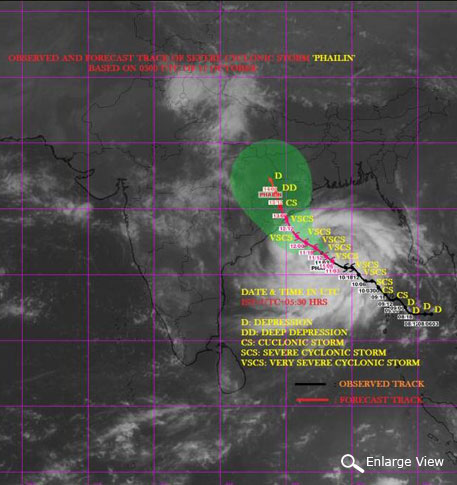 The deep depression that had formed over the Bay of Bengal has intensified into a super cyclone; it is moving towards the Odisha and Andhra coast at the speed of over 200 km per hour. The cyclonic storm is expected to make a landfall on Saturday evening.

“The very severe cyclonic storm, Phailin over east-central Bay of Bengal remained stationery and lay centred at 8.30 hrs (IST) 2013 near latitude 16.00N and longitude 88.50E, about 520 km south-southeast of Paradip, 530km south-east of Gopalpur, and 530km east-southeast of Kalingapatnam,” the alert from India Meteorological Department (IMD) in the morning said. Later in the day, the cyclone was declared a super cyclone.

It would move north-westwards and cross north Andhra Pradesh and Odisha coast between Kalingapatnam and Paradip, close to Gopalpur (Odisha) by evening of October 12 as a very severe cyclonic storm with a maximum sustained wind speed of 210-220 km/hr, the IMD alert said.

The predicted severity of cyclone Phailin has Odisha authorities worried. Phailin in heading towards the same coastal districts that were affected by the 1999 super cyclone, including Kendrapada and Jagatsinghpur.

"Cyclone Phailin could be life threatening for Kendrapada, Jagatsinghpur, Ganjam, Puri and Balasore districts. Keeping this in view, the state government has urged seaside villagers to leave for safer places. The authorities are also working with local sarpanchs and other panchayat body members to help people prepare for the cyclone. The government has identified villages that are the most vulnerable and are being moved as part their evacuation plan," said Jugul Kishor Mohapatra, chief secretary of Odisha.

The cyclone is expected to hit Paradip port on Friday night. It is feared that the cyclone would be so severe that it could imperil the lives of thousands of people in the coastal districts.
“The coastal areas of Kendrapada and Jagatsinghpur are regularly hit by major cyclones and so everyone is taking this threat extremely seriously and making sure the right measures are in place to mitigate the impact and place everyone on alert. Large numbers of seaside villagers are being moved from their villages to safe buildings or cyclone shelters,” said S K Mallick, district collector of Jagatsinghpur.

“The government has also issued a warning to people against visiting the seaside to avoid any danger. The authorities are prepared for any emergency situation and deployed heavy machinery to deal with any situation,” added Mallick.

The officials at Paradip Port Trust (PPT) have raised the cyclone signal level to four. Regular coordination meetings are being held at all levels of government and humanitarian agencies; they have started preparedness activities, including pre-positioning emergency supplies, added Mallick.

Thousands of marine fishers have tied up their vessels in the fishing harbours and jetties. Many NGOs and other agencies are working with the government to prepare their disaster response procedures ahead of a cyclone, said Mallick.

Kendrapada’s culture of preparedness began after the devastating 1971 cyclone that claimed an estimated 10,000 lives in the seaside villages of Rajnagar and Mahakalapada blocks of the district. In 1999, when another super cyclone struck, people helped evacuate thousands of people from the disaster area, saving countless lives. The death toll from that tragedy was only 486. On the other hand, more than 10,000 people perished in the 1999 super cyclone in Earasama and Kujang blocks in Jagatsinghpur district.

“We are very concerned about the seaside village residents, particularly those in low-lying areas, and we are working urgently with the villagers. But we are running against time and lives are at risk,” said Balaram Parida, former chairperson of Mahakalapada block in Kendrapada district.

The Odisha government started preparation from Wednesday by stocking large volumes of food grain and medicine at different places and asking the administration to put an alternative communication system in place as a cyclone.

An alert was sounded in 14 districts.

The cyclone started as a deep depression over North Andaman Sea, the Met office at Bhubaneswar had said on Wednesday evening.

Director of Bhubaneswar Met office, S C Sahu, had warned of sever impact: “the atmospheric system is gaining strength from all directions over Bay of Bengal”.

Meanwhile, the state government has set up a 24-hour control room to keep a close watch on development and has cancelled Durga Puja vacation of government employees in the 14 districts.
Chief Minister Naveen Patnaik on Wednesday took stock of the situation in a high level meeting attended by revenue and disaster management (RDM) minister Surya Narayan Patro, RDM secretary Taradatt and development commissioner I Srinivas. District collectors of 14 districts also spoke to the chief minister through video conferencing.

The meeting resolved to release water from all reservoirs, apprehending that heavy rain would occur under the influence of cyclonic storm. Six sluice gates were opened at Hirakud reservoir – the largest reservoir of the state.

Odisha Chief Minister Navin Patnaik had written to the Centre, requesting it to instruct the armed forces to be on standby to help the state administration in rescue and relief operations. According to sources, experts have informed the state government that the cyclone would be a severe one. The IMD forecast on vulnerabilities indicate that the communication systems in Odisha and Andhra Pradesh coast will be severely damaged. This is a major concern as communication plays a key role in evacuation and relief operations.