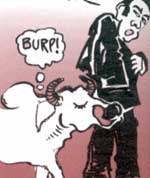 A NEW, almost completely biodegradable credit card was jointly launched by the Greenpeace and the Co-operative bank at the Design Museum, London, on May 7. This is the first time that a card which is 99.9 per cent polyvinyl chloride (PVC)-free has been produced. 'The card is made of a biodegradable material, known as Biopol, produced from cereal plants. "The Greenpeace card is a real break-through for the environment," said Peter Melchet, executive director, Greenpeace. While the Biopol plastic is itself 100 per cent PVC-free, the magnetic strip attached to it and some of the inks still contain traces of PVC.

Greenpeace has been highlighting alternatives to PVC for many years as part of an international campaign against the polluting plastic. The production and disposal of PVC releases harmful chemicals like dioxin which is the most toxic synthetic chemical. Dioxin is also known as a hormone disrupter and carcinogen.

At present there are 564 million credit card holders worldwide. Besides,