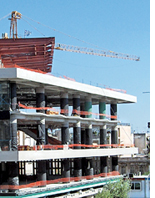 A throng gasped as a blue crate containing a 2.5-tonne slab of marble regarded as one of the most important works of antiquity, was hoisted by a giant crane from the Acropolis in Greece. This was the first sculpture to legally leave the citadel since Phidias carved the artworks 2,500 years ago. The sculptures are being transferred to a new museum 400 metres away.

The first to be shifted was half of the sculpture depicting the great Panathenaic procession. The other half was removed from the Parthenon in Acropolis by Lord Elgin 200 years ago and sold to London's British Museum. Designed by the Swiss-American architect Bernard Tschumi, and sponsored by the eu, the new museum, the Greeks hopes will repudiate the argument that modern Greece is incapable of housing the treasures of its golden age. "Greece can now house the sculptures in a much better way than the British Museum," said David Hill of the International Association for the Reunification of the Parthenon Sculptures.