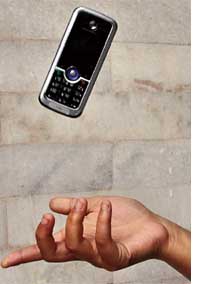 HOW many times did your mobile phone run out of battery exactly when you needed to make an urgent phone call? What if in such a case, instead of cursing your mobile, you could do this: Rejuvenate your battery simply by pressing the mobile keypad or dialling the number. Seems incredible but Zhong Lin Wang and his team have found a novel way to convert such light, irregular motion into electrical energy to recharge cell phone batteries.

While we bank a lot on the motion of the dynamo to produce electricity, a number of inconsequential movements like fluttering of flags and tapping of fingers, which could otherwise be a good source of energy, go unnoticed everyday. There is no method by which these low-scale movements could be harnessed for the production of electricity.

Nanotechnology provided Wang with a solution but he did not have the material which could help in the conversion of energy. Certain chemical compounds which have a crystalline structure, produce electricity under mechanical duress. At the same time not all of such compounds can form nanowires which is what the team needed to make their device. Finally, Wang and his team zeroed in on crystalline zinc oxide which fitted their bill.

Nano-sized zinc oxide wires produce electrical charges when they are bent and then relaxed. Wang's research team constructed nanogenerators by encapsulating single zinc oxide wires within a flexible polymer. One end of the single wire generators was fitted with the index finger of the person using the mobile and the other end to the battery of the cell phone. As the finger tapped on the mobile keypad, the contraption generated tiny amounts of current to charge the mobile battery.

"Using nanotechnology, we have demonstrated ways to convert even irregular biomechanical energy into electricity," said Wang. This study was reported in the February 11 online version of the American Chemical Society journal Nano Letters.

Wang estimated that thousands of such single wired generators would be needed to charge a mobile phone fully. The device could be carried around by mobile users and when the mobile is low on battery, it could be fitted to the fingers of the hand operating the mobile. More the fingers move, more is the energy generated to charge the battery.