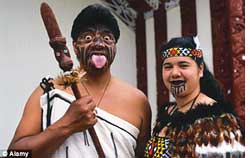 A New Zealand tour operator is in trouble. Instead of employing Maori, the tour company Discovery Heritage Group based in the northern New Zealand city of Tauranga, paid backpackers visiting from France and Israel to dress up in feathered robes, draw tattoos in pen on their faces and go aboard cruise ships when they pulled into the port city of Tauranga.

The company’s director, Terina Puriri, told New Zealand Herald she does not see a problem using foreigners and the tourists do not mind because the dancers “look beautiful”.


Puriri, who is Maori but not from a local tribe, told the newspaper that she also had no choice but to use fakes because local Maori are so lazy. But Graeme Marshall, the Commercial Manager at the Port of Tauranga, says fake Maori are no longer welcome. “This isn’t a cultural issue, it’s about a breach of security,” he said. Maori elders say while they are insulted, they are more upset about the tour operator’s comments that local Maoris are lazy.