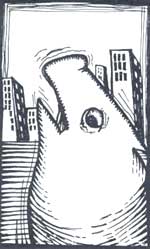 PANIC-STRICKEN by an illicit liquor that has taken a toll of at least 75 persons and a mysterious fever that may be Japanese encephalitis or simple food poisoning, Patna medical authorities have issued a series of directives that range from the irrelevant to the naive.

Many days after the outbreak of the disease in the Lohanipur area, an unsightly collection of dilapidated huts, stagnant pools of filthy water and dingy lanes littered with excreta that is home to about 600 families and their 1,000 pigs, state and city health officials were still debating the identity of the fever. But that did not deter them from issuing a series of notifications in local newspapers, one of which required pig-owners to remove their pigs to a municipal farm and make arrangements for their upkeep there, failing which the pigs would be killed. The notification took no account of whether the pigs are, in fact, carriers of the killer virus or that pig-owners are invariably from the weaker sections of society. The pig-owners have responded with protests and an offer to government officials that they are welcome to take the animals away provided the owners are compensated. Patna magistrate Abhay Singh's reply: "We will do so (confiscate or kill the pigs) come what may. This is in the public interest. If these people do not understand that, we cannot help it."

Health officials are resorting to DDT sprays to check mosquitoes, though the chemical is ineffective against the culex mosquito, some species of which are transmitters of the encephalitis virus. Studies have shown that upto 80 per cent of the mosquitoes in Patna are of the culex variety, which makes the residents of the city specially vulnerable to encephalitis.

But no systematic investigation was carried out for many days after the outbreak of the epidemic to determine its exact nature. Bodies of the victims were not autopsied, nor were vital tests carried out. Instead, officials simply assumed that they were dealing with an outbreak of Japanese encephalitis, even though other senior doctors in the state capital pointed out that the symptoms strongly suggest botulism (food poisoning). The immediate need, it has been pointed out, is for a comprehensive programme that would range from a full-scale clean-up, spraying and fogging with effective chemicals, thorough testing of patients and victims, and a complete check of Patna's water-supply system to determine if the epidemic was caused by bacterial infection. Meanwhile, pigs in Patna continue to be considered 'deadly'.