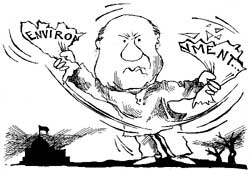 On February 19, law minister Ramakant Khalap went on to state that the Centre is considering some steps to curb profligacy in pils as they are "choking" the legal system, and as almost every decision of the government is being challenged in courts all over the country. Reacting sharply to this, erstwhile Chief Justice of India, A M Ahmadi, said that the judiciary would not tolerate such a step. Although Ahmadi admitted that many have tried to abuse pils for gaining publicity, the court should be taking care of such situations. "Access to justice cannot be denied on grounds of economic constraints, illiteracy or ignorance," he contended. The bill, which currently awaits the Cabinet's clearance, has asked for a mandatory interest-free deposit of Rs 1 lakh for every pil to be placed in the Supreme Court (sc) and Rs 50,000 for pils to be placed before high courts (hc). The deposit shall be refunded at the discretion of the court if the petitioner wins the case. However, it can be forfeited if the petition is dismissed. 'Baseless' pils should also attract a punitive fine, contends the draft bill.

The draft states that a pil can be submitted only by those who have a direct interest in the litigation. The exception would be in the case of enforcement of the rights of the poor. But again, this has been significantly qualified: a poor person is defined as one whose annual income does not exceed Rs 6,000. The draft clearly spells out the grounds for moving a pil by stating: "Purely executive action of the government does not infringe any constitutional or legal rights of the petitioner and should be excluded from the purview of the public interest litigation..." Government officials, however, refused to divulge any information about the bill.

Commenting on the move, former Chief Justice P N Bhagwati said, "It will be the most retrograde step that the Centre will be taking. The pil is the constitutional right of a citizen and it helps invoke the constitutional jurisdiction of the court. You cannot take away this right without amending the Constitution of India. Moreover, one cannot place an impediment in the fundamental rights of a citizen. " Articles 32 and 226 of the Constitution empower a citizen to move the sc and a hc respectively, for a direction to the state -- as a mandamus or other writs -- for restoring a fundamental right. Says Bhagwati, "If there is no remedy who will the citizen go to?" Commenting on the Rs 1 lakh deposit, he pointed out that with 40 per cent of the people in India living below the poverty line, it is impractical to expect people to pay such huge amounts.

Bharti Chaturvedi, member of the ngo Srishti, said that the government's move was "shocking". Commenting on the impact it will have on environmental legalities, she observed, "The issue is very crucial at a time when India is in the midst of liberalisation, joint ventures, partnerships with international firms and transfer of technologies. Some technology may not be environmentally suitable and it is only through courts that people can agitate against powerful interests."

Renowned environmental lawyer M C Mehta termed the government's move as "draconian". He observed that "this bill will not stand the test of scrutiny as it is completely anti-democratic". He added, "In our country there are major environmental problems like deforestation and pollution. When some environmentally conscious citizens want justice, the government is trying to gag their mouths." Pradyumna Kaul, member of the National Alliance for Peoples Movement, New Delhi, shared the view and felt that the Centre's move was "starkly unconstitutional".