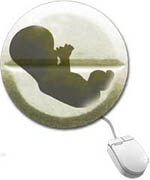 The site posts the drugs only to countries where abortion is heavily restricted, and to women who declare they are less than nine weeks' pregnant. The website says it can help reduce the problems linked with unsafe abortions.

But anti-abortion campaigners have called such sites "very worrying indeed". Josephine Quintavalle, from the uk- based group, Comment on Reproductive Ethics, said: "It's like taking abortion into the shadows. These drugs have side-effects and tragedies will increase."

The bbc report quotes a British Journal of Obstetrics and Gynaecology study which found that 11 per cent of its respondents went on to need a surgical procedure--either because the drugs had not completed the abortion or because of excessive bleeding.

Of the 200 women interviewed for the British Journal of Obstetrics and Gynaecology study 58 per cent said they were just grateful to have been able to have had an abortion in this way, while 31 per cent had felt stressed but found the experience acceptable.

The Family Planning Association in Northern Ireland said that on two occasions, women bought drugs without appropriate medical information. They experienced complications and needed after care. The association's director Audrey Simpson, said: "The women on web site is very helpful and reputable. "But for Northern Ireland women, it is encouraging them to break the law."