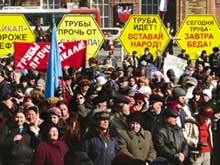 Russian President Vladimir Putin recently ordered the East Siberia-Pacific Ocean oil pipeline to be built more than 40 km from the un -protected heritage site of Lake Baikal. Putin said the pipeline must be rerouted since Baikal, the deepest freshwater lake in the world, was home to more than 1,000 species of unique plants and animals.

It was a complete detour for Putin, who some months back had called opponents of the pipeline "saboteurs". The step might end a bitter struggle that threatened to grow worse as scientists and environmentalists staged strikes and accused government regulatory agencies for signing off the deal.

Ecologists warned that the lake was located in a seismically active zone with earthquakes occurring every two decade, significantly increasing the risk of an oil spill. While environmentalists welcomed the president's decision, oil companies expressed concern.