Farmers in the Peruvian highlands learn that all's not well with their produce, land and health 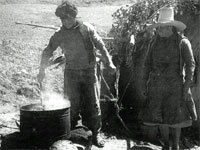 three decades of pesticide use in the Peruvian highlands has unsettled the balance of the Andean ecosystem. The rise in the number of cases of poisoning among farmers, declining soil fertility and reports of pests becoming resistant to agrochemicals has made the "technological revolution" in Peru far from successful.

There is some hope though. Of late, people seem to have woken up to the problem -- both at the local and state level. Farmers have realised that the constant application of pesticides affects the quality of tubers, changes their texture and sometimes makes them taste bitter. Some farmers are now trying to develop sustainable farming methods using limited amounts of external inputs. They intend to recycle local resources in order to generate inputs and techniques aimed at managing photo-sanitary problems in potato farms. The combination of various ecological techniques, participatory training processes and the lessons learnt from experiences is helping reduce some of the damage caused by plagues.

At the state level, the Peruvian Congress is responding to the crisis through its Agriculture, Environment and Amazon Committees. For example, the Law Promoting Overall Management for Ecological Plague Control lays down the foundations for sustainable farming practices. In addition, it has created a number of opportunities for state and private development projects to gain access to state funds and international technical cooperation and to implement actions based on the overall management of plagues.

The experience gained in the integrated pest management programmes promoted by the public and private development projects have also proved that it is possible to do without extremely toxic inputs when controlling plagues and diseases.

Initially, agrochemicals brought in a kind of a revolution in the farming sector. Encouraged by increased production, barring a few, most farmers adopted pesticides. In the highlands, pesticides were mainly used to control the Andean weevils (Premnotrypes spp), potato moths (Phthorimaea operculella and Symmetrischema tangolias), fleaworts (Epitrix spp), rancha (Pythophthora infestans) and various species of nematodes that infest potato plantations.

Various strategies were adopted to boost the use of pesticides, particularly in potato plantations. Pesticides seemed so effective to tackle pests, that its popularity among farmers soared and soon most of them were using them. At present, there are at least 20 companies that import or prepare agrochemicals. For low-income farmers, low-cost pesticides -- such as those made with organic phosphorus compounds -- are being produced and sold even in remote places. All this has resulted in a host of problems -- economic, social and environmental -- for the farmers (Leisa , Vol 15, No 1/2).

The initial effect in controlling significant plagues was satisfactory. However, pests soon became resistant to the pesticides and other chemicals had to be added. Hence, the change from organochlorine insecticides to organophosphates and carbamates. About 150 species of phyto-pathogenic fungi have become resistant to various fungicides. Another indicator of the increasing level of resistance to pesticides is the increasing dosage and frequency with which pesticides must be applied. In 1986, 25 kgs per hectare (ha) of commercial aldicarb plus 4.5 litres of insecticide was recommended. Ten years later, the technical recommendation was to use 36 kg/ha of aldicarb plus 5 litres of insecticides, although farmers tend to use much more.

Besides, there have been reports of loss in soil fertility, disappearance of essential and pollinating insects, reduced biodiversity as well as water contamination and increased incidence of poisoning.