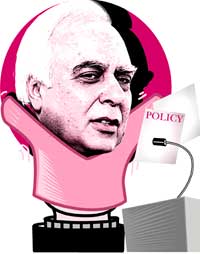 the Union government has announced its action plan for the biotechnology sector but it reads more like a wish list prepared by an industry pressure group. The draft National Biotechnology Development Strategy seeks to propel the current us$750 million biotech industry to a us $5-billion one, employing about one million people by 2010. The sector is growing at an estimated yearly rate of 40 per cent. But the rate of employment is showing a declining trend, suggesting the target of 1 million jobs may be far-fetched (see table: Galloping growth).

"We want this to be a road map for the next several years," said Union science and technology minister Kapil Sibal while releasing the draft on March 31, 2005. The strategy's highlights include easing of regulatory steps for genetically engineered products, industry sabbaticals for public sector scientists and improved curriculum for biotechnology courses in college.

The emerging biotech industry should be happy with the draft for offering much more than it could have asked for: 100 per cent foreign direct investment, setting aside a substantial part of the funds of the department of biotechnology (dbt) for public-private partnership projects, prioritised bank loans, hassle-free regulation and imports, and setting up of 10 biotech parks, on the lines of the Software Technology Parks of India, by 2010. "Up to 30 per cent of biotechnology research budget (of Rs 200 crore) will be spent through public-private partnerships," Sibal said.

But experts criticise the plan for leaving several grey areas in recommending regulation as also for the way it treats the issue of human resource management. They say the approach of the draft is too simplistic. A close look at its salient points (see box: High hopes) would be in order.

"What is novel about the new action plan is the innovation system approach," says Sachin Chaturvedi of the Delhi-based Research and Information System for the Developing Countries (ris), an Indian think tank. According to him, it has several suggestions to encourage innovation and entrepreneurial skills of scientists such as allowing them to work in industries for a maximum of three years to expedite commercialisation of their research efforts. Besides, eligible young scientists can get travel grants approved in two weeks flat to go abroad to meet their mentors and industry collaborators. But some experts feel there could be a catch here. "Unless the intellectual property rights are properly delineated, public sector scientists may end up working for generating private goods," says Nandula Raghuram, a reader with the ggs Indraprastha University, Delhi.

Similar sentiments are echoed by Rajeswari Raina, a scientist at the National Institute of Science, Technology and Development Studies, Delhi, which is under the Council of Scientific and Industrial Research (csir). The document seems to suggest the public sector research councils such as the Indian Council of Agricultural Research (icar) and csir would serve as mere adjuncts to the industry for which they should be the support centres, technology incubators and human resource training centres, points out Raina.

On the positive side, the strategy's emphasis on public-private partnerships will boost a constant flow of ideas. Not only can there now be joint research projects, but joint staff too, with academics being allowed to hold positions in industry and vice versa.

This has already started happening in India. For instance, a team of scientists from the Bangalore-based Indian Institute of Science have set up a bioinformatics firm called Strand Genomics. "The idea is to help blossom the entrepreneurial capabilities of Indian scientists," says dbt secretary M K Bhan.


The past few years have seen a surge in demand for skilled personnel in life sciences from fledgling pharmaceutical, biotech and bioinformatics industry, leading to the mushrooming of self-financed educational institutions offering biotechnology courses. According to an unpublished study by Indraprastha University, there are about 25 institutions offering biotechnology courses in and around Delhi alone. Similarly, there are at least 40 colleges under the University of Bangalore that offer a Bachelor's degree in biotechnology. How good are these courses, especially those being offered by private institutions?

The University Grants Commission (ugc) follows queer logic regarding the self-financed institutions: as long as they do not ask for any grant, no questions will be asked about the quality of teaching or facilities. As a result, it is estimated that India produces an astounding 300,000 postgraduates and 1,500 ph ds in life sciences every year but most of them lack applied skills and knowledge. "This has seriously dented the image of an Indian biotech professional," says Raghuram.

Concerned at the fall in standards, the strategy calls for a host of actions to match supply with needs like training of teachers and modifying/introducing curricula that address the necessary issues. But what is quite clear is that curriculum changes alone cannot find a remedy to this problem. Perhaps, it might require a serious review of policies that led to nondescript foreign universities setting up shop in India and the rapid spread of self-financed colleges.

Unlike other streams of science and technology, biotechnology is not one discipline, but a convergence of as many as 20 disciplines ranging from chemical engineering to taxonomy to medicine. Perhaps that's why countries such as the us do not have an academic programme in biotechnology, but meet their requirement for humanpower in the sector through recruiting people from diverse streams of life sciences.

The draft strategy also talks of increasing the number of annual doctoral fellowships from 50 to 200.


The draft has a proposal to set up an autonomous National Biotechnology Regulatory Authority to approve biotech products -- a task until now handled by the Genetic Engineering Approval Committee of the Union ministry of environment and forests.

According to Bhan, the new regulatory authority would have divisions devoted to three distinct areas: agricultural products and transgenic crops; pharmaceuticals and industrial products; and transgenic food, feed and aquaculture.

The idea stems from recommendations made by two expert panels on agricultural and pharmaceutical biotechnology products, headed respectively by noted agricultural scientist M S Swaminathan and by csir director general R A Mashelkar.

The draft stresses the need to streamline guidelines and procedures to approve genetically altered pharma products, which currently is a complex process involving multiple ministries and regulators that lack coordination.

However, greater clarity is required on at last one recommendation contained in the strategy document -- the one regarding field trials of genetically engineered products. The document says, "It is recommended that an event that has already undergone extensive biosafety tests should not be treated as a new event if it is in a changed background containing the tested and biosafety evaluated 'event'." It goes on to say that in such an eventuality, the product (if it is an agricultural variety) would need to undergo a two-year trial by icar only to establish its agronomic performance and genetic stability. Other vital parameters such as genetic contamination (of other plant species and animals) and the impact on the ecosystem will not be evaluated at all.

But scientists warn that even extensively tested transgenic crops can play havoc when introduced in a new eco system. By not defining the issue unambiguously, are we not inviting biotech firms to exploit regulation?

Experts feel caution could be the keyword when tinkering with regulatory processes. "Biotechnology is an invasive technology and its adverse impact on food chain or health cannot be overlooked simply because there is pressure from the industry," points out Chaturvedi.

The ris scientist was also surprised that the document overlooked biosafety and trans-boundary trade of food, feed and healthcare products based on biotechnology. "Not just this, a number of legislations that came out in the recent times such as the Patents (Amendment) Act of 2005 and Food Safety and Standards Bill, 2005, which is currently before Parliament, are silent on biosafety, despite India being a signatory to the Cartagena Biosafety Protocol," says Chaturvedi.