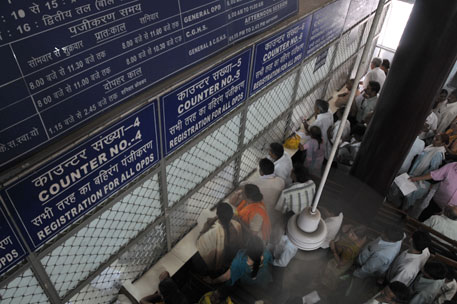 The 12th Five Year Plan, with its strong tilt towards private health care, will result in denial of health services to people, claim public health experts. The plan document's chapter on health, drafted recently by the Planning Commission, is yet to be made public. But health experts who have access to the document say that the restructuring of the health care system as envisaged by the Planning Commission would effectively lead to handing over of public health care to the corporate sector.

To prepare the health plan, the Planning Commission had set up a high level expert group (HLEG) to look for an appropriate model that the country could follow. A new model was envisaged as the existing health system has failed to meet the needs of the country; and consequently, health indicators remain poor.

In hope to rectify the problems in the plan document, members of HLEG will meet on August 9 to discuss the document and frame the recommendations for changes in the draft. These would be sent to the Planning Commission. “We have already spoken to the Planning Commission about the problems but there is no substantial reply from them,” reveals Vandana Prasad, national convenor of Public Health Resource Network, an advocacy group.

The Five Year Plan is scheduled to be finalised by the end of this month.

The 12th Plan hopes to set down a system for universal health care in the country through decade-long reforms. While the plan document talks about strengthening of the public health care system, the commission's heart seems to be more in privatisation. The document suggests that efforts would be made to find a workable way of encouraging cooperation between the public and private sector through “contracting-in of services”, and also various forms of PPP.

The Planning Commission has drawn up a completely new health delivery system for the country. This system promotes managed care (as in the US) where the private healthcare providers would play a prominent role. Under this, the consumer would be given the choice of where to get treatment and in case he or she opts for the private sector, the health care provider would be reimbursed by the government. The management system in place is supposed to ensure that the services are provided to a patient at minimum cost to the public exchequer. Health activists say though the consumer has been given a choice, he or she may be compelled to opt for private health care because the public sector is poorly equipped and cannot compete with the private sector. Moreover, no efforts might be made to improve the public sector health facilities.

“We see this as the government’s way of providing sops to the private sector at the time of economic recession,” says Prasad. The public sector has been relegated to non-profit making work like immunisation, antenatal care and health education in which the private sector is not interested.

With increased privatisation, there is a fear of increase in irrational treatment as the aspect of money has been introduced in decision-making. The private sector is not regulated very well and in the absence of a robust public health system, citizens would be at the mercy of the private sector. “First put the regulatory system in place,” suggests Jashodhara Das of Sahayog in Uttar Pradesh.

The Planning Commission has also not put in money for health in this plan. Despite promising an increase in the public expenditure on health for many years, the current plan promises only 1.58 per cent of GDP on health. This is less than what was promised in the 11th Plan, and far too little when compared to allocations in countries like the US where managed care is provided. US spends around 8 per cent of its GDP on health care.

This move is an indicator of the government’s thinking about health and other social sectors. This is the government’s political position and not just the technical position, says Amit Sengupta of Jan Swasthya Abhiyan. This system would minimise cost for government but this would be at the cost of killing the patient, he adds. For instance, it is very likely that to cut costs patients may be discharged before recovery.