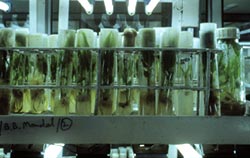 the Comptroller and Auditor General of India (cag) has flayed the National Bureau of Plant Genetic Resources (nbpgr) for failing to evaluate almost 95 per cent of foreign plant germplasm brought into the country for research.

cag has also levelled several other charges against the Delhi-based bureau, including giving quarantine clearance to consignments without import permits, thereby risking the spread of alien pathogens and pests.

Between 1997-98 and 2002-2003, as many as 4.39 lakh exotic germplasm samples were introduced into India, but nbpgr barely evaluated 22,500, says cag in its latest report. The bureau, set up in 1976 under the Indian Council of Agricultural Research (icar), is the sole agency to clear foreign plant germplasm and also the official facility to conserve domestic plant genetic material.

When contacted, nbpgr director B S Dhillon said most samples do not require a detailed assessment as they come from institutes under the Consultative Group on International Agricultural Research (cgiar). "Over 75 per cent samples are from cgiar institutes such as the International Rice Research Institute, where the samples have already been evaluated," he said. "As and when we require, we can procure the details (of evaluation) from these institutes," said a nbpgr scientist on condition of anonymity.

Dhillon said complete evaluation of a sample takes about three years during which it is grown in different agro-climatic conditions and its characteristics and disease profile mapped. To speed up the process, nbpgr began a Rs 4.81 crore scheme under the 10th five year plan. Under the scheme, initially four major foodgrain crops -- rice, wheat, pigeonpea and chickpea -- are being taken up for evaluation by All India Coordinated Research Projects for respective crops. nbpgr scientists visit the project sites periodically. In all, nbpgr characterises 14,000 germplasm annually.

According to a botany professor at Delhi University, it is the responsibility of the institute that requests for a germplasm to evaluate it. "The primary responsibility of nbpgr is quarantine and conservation of germplasm collected both within the country as well as abroad. Evaluation becomes secondary," she says. However, most of the time, the institutes do not provide such data to nbpgr. "It is quite like a doctor prescribing medicines to a patient. The patient, once he recovers after taking the medicine, does not report back to the doctor. The doctor would have liked him to do that so he could understand the efficacy of the medicines."

Dhillon says the country has been inundated by samples over the past few years. While nbpgr collected 1.66 lakh germplasm over 14 years (1976 to 1999), it acquired 1.13 lakh in just three years from 2000 till 2002. Most countries, including India, have been requesting for more samples apprehending difficulties in importing them. This is because following the Convention on Biodiversity in 1992, various countries have been enacting laws restricting export of germplasm.

cag also indicted nbpgr for clearing 1,518 imported germplasm without growing them in the greenhouse for conducting post-entry quarantine tests. Such clearance "was fraught with the hazard of spread of pathogens, diseases and pests of other countries in our country," the cag report said.

Dhillon clarified that as per the rules, only those samples that carry pests, diseases and viruses or were chemically treated need to be grown in the greenhouse. Besides, the Indian Quarantine Regulations allow public research institutions with competent plant pathologists to conduct such studies. The bureau sends a large number of samples to institutions such as the Punjab Agricultural University and Tamil Nadu Agricultural University, and nbpgr experts inspect such test sites.

Another charge by cag was that about 56 randomly checked germplasm consignments lacked valid import permit. Of these, 12 were imported by private firms. Dhillon said in these cases, the documents were either withheld by customs authorities or misplaced. Such material is doubly checked at quarantine to ensure no pathogens or diseases enter the country, he stressed.

But the cag report should be taken a serious note of. Recently, explosion of live shells in imported metal scrap killed 10 people in Sahibabad. When such large objects could escape attention, the country has to be especially vigilant when dealing with invisible pathogens that are potentially more lethal.