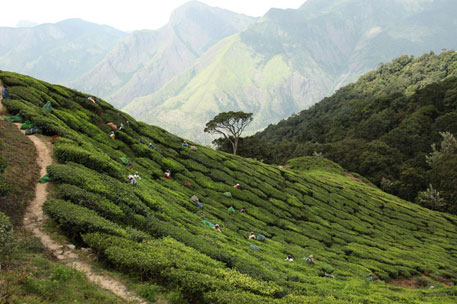 One of the last acts of former president Pratibha Patil while she was in office was to accord her assent to the amendment of the Kerala Land Reforms Act. The amendment allows the use of five per cent of plantation land for hotels, resorts and other tourism projects. The amendment itself is seven years old; it was in 2005 that the then UDF (United Democratic Front) government had piloted it in the state Legislative Assembly. Being an amendment to the land reforms Act, it could become a law only with the assent of the president.

It was the first government of Kerala, which came to power in 1957, led by the veteran communist E M S Namboodiripad, that had ushered in the Land Reforms Act. But it became a law only in 1963 after undergoing several dilutions and dithering on the part of the state government. The most important provision of the law was that an individual could possess only 15 acres (one acre equals 0.4 hectare) of land. The only exemption was for plantations, on which there was no ceiling. There was, however, a rider to the exemption: if the plantation land is used for any other purpose, its character would change and it would immediately attract the provisions of the Land Reform Act, including the provision on ceiling of 15 acres. It is this provision that has been amended. Apart from tourism, plantation land can now also be used for cultivation of vegetables, vanilla and herbs. Yet another provision is that cashew, which had not so far qualified as a plantation crop, has been given that status for the purpose of this Act; this would mean that one could own land without any limit if only there are at least 150 cashew trees in one hectare.

There is widespread criticism of the amendments from environmentalists, politicians of left orientation and even a few leaders of the ruling coalition. It is a twist at the end of the tale, which would alter the tale itself beyond recognition. “This amendment will undermine land reforms,” says V D Satheesan, a Congress MLA, who along with T N Prathapan, another Congress MLA, and a few others are actively opposing the move of the state government. Satheesan points out that most of the plantations in Kerala are either in deep forests or on the fringes of tiger sanctuaries. Permitting tourism projects in such ecologically fragile areas would be suicidal, he says.

Even though the amendment was passed by the Kerala legislature in 2005, it did not receive the nod from the president before the UDF lost the ensuing election and went out of power. When the LDF (Left Democratic Front) came to power, it lobbied against the amendment and the CPI(M) (Communist Party of India-Marxist) wrote to the president, requesting him not to make it a law. The Central government then sought the views of the state; the Left government maintained a convenient silence for three years. The  government in its last year in office, made a Cabinet decision against the amendment.  However, the Centre observed that a Cabinet decision will not do and that a resolution from the Legislative Assembly was required. But the government did not move any resolution in the assembly and then the LDF lost the 2011 assembly elections. The UDF which moved in, lobbied for the amendment and the presidential approval was secured.

The leader of the Opposition and former chief minister, V S Achutanandan, has severely criticised the amended Act. The UDF is sabotaging the land reforms laws, he says. The changes in the law would be a boon for those who hold large tracts of plantation land, like the Tatas and the Harrison Malayalam groups. The Tatas can now convert land use of 1,174 hectares (ha) of the 23,772 ha  it holds and Harrison Malayalam can convert over 4,452 ha of land from the 101,171 ha it holds for real estate purposes, he said. It is estimated that the state has 197,542 ha of plantation land. By this amendment, as much as 9,874 ha of land can be used for other purposes.

Setback for cases against existing resorts

Congress leader V M Sudheeran, former speaker and minister, has written to Chief Minister Oommen Chandy, criticising the government move. In his letter, Sudheeran said the decision would have serious consequences for the state, the people, and the environment. It would cause a serious setback to the government’s cases against plantation groups such as Tata, Harrison Malayalam Ltd and others. The amendment would make all resorts that had been constructed on plantations legal, he said.

The state had undergone convulsive tremors in 2007 when the erstwhile chief minister V S Achutanandan had launched a demolition offensive against resorts and hotels in the salubrious Munnar hill station on the ground that they were on plantation land, which cannot be put to any other use. The unprecedented move had caused ripples across the state, but ended in a whimper because of the tremendous clout wielded by landholders. The present amendment could also force the government to return the land taken over by it in Munnar.

The immediate impact will be on the ongoing cases against plantations in the Nelliampathy hills in Palakkad district. Fifty-two estates on forestland measuring approximately 4,047 ha were given on lease to various individuals. This was in continuation of the practice that started in 1863, when the land was leased to the British on the condition that forestland thus given on lease cannot be used for non-agricultural purposes. The land cannot be sold in pieces. New laws were subsequently formulated for strict control of construction activities. Despite all this, 32 resorts are functioning in these 52 estates. The government has been fighting in the courts since long for terminating the lease agreements. The present amendment is likely to make all these constructions legal and would also serve as an incentive to others. Satheesan points out the possibility of an individual owning 40 ha of plantation land converting two ha into a resort and selling the remaining land to another person, who in turn starts a tourism project on 1.9 ha and sells of the rest. Fragmentation of plantation cannot be prevented, he says.

The ostensible purpose of the amendment in 2005 was generating income for the plantation sector which had fallen on lean days. Whether irreversible changes and alterations can be made on the landscape for temporary gains is in itself debatable. Whether tourism is the answer for all the woes is yet another question. Kerala’s landscape has undergone dramatic transformation over the past few decades because of so called development. This amendment threatens to destroy what is left, say environmentalists.