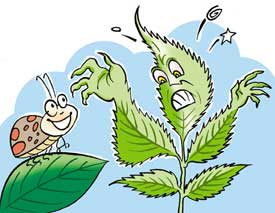 the department of biotechnology (dbt) under the Union ministry of science and technology and earth science claims they are supporting coordinated research projects on development of plant-based pesticides. According to Kapil Sibal, the minister concerned, the aim is to bring out cost-effective and commercially viable formulations for use under integrated pest management (ipm).

But the fact is there has been very little contribution by the ministry in the last two decades. At present, the only plant-based pesticides available in the country are derived from Azadirachta indica (neem). There are possibilities beyond neem and experts feel that the basic thought behind the research on botanicals by dbt is faulty and does not take into account India's strength -- traditional knowledge.

The minister revealed that a total of 694 samples from 61 species have been screened against eight test insects (pathogens). Six plants were found effective against diamond back moth, aphids, tobacco caterpillar, cabbage semilooper, mosquitoes and the red spider mite. Four most effective species were identified and a total of 55 formulations were prepared. Three formulations have, so far, demonstrated positive activity against diamond back moth, aphids and mosquitoes. These formulations will now be taken up for limited scale field trials for further evaluation.

dbt has been promoting botanicals since 1986 and provides grants to universities to come up with products. Under the 8th five-year plan, a programme for the development, production and demonstration of botanicals under ipm was launched. This was followed by a research and development programme for biological control of crop pests and diseases under ipm as a component of Integrated Nutrient Management programme, in 1998-1999. This was launched at 14 centres in 12 states with the aim of developing effective packages of practices, which are cost-effective, sustainable and eco-friendly in different ecosystems. The department also started an all-India coordinated research project on development of environment-friendly and plant-based pesticides with nine participating institutions in 2003. eid Parry, one of the major manufacturers of neem-based pesticides, is a partner in the project.

Despite such efforts, products have not been developed and most of the work is still limited to only screening of different plants. For example, as the latest (2005-2006) annual report of dbt reveals, the Assam Agricultural University, Jorhat, has evaluated indigenous plants against pests of tea and found that root extract of Linostoma decundrum and leaf extract of Clerodendron inerme were effective against red spider mite. spic Science Foundation, a Chennai-based ngo, had earlier isolated clerodin from another species of Clerodendron (C. infortunatum) in 2003-2004 funded by dbt . The problem is work on two different species under the same genus is being taken up by different organisations. But Seema Wahab, the scientist at dbt who is in charge of the projects, says the screening process is important and takes a long time.

A 2004 report on ipm suggests that the major advantage is that botanicals can be formulated on-farm by farmers themselves but dbt researchers focus only on biotechnology and try to come up with stable compounds with long shelf lives. According to M S Chari of the Centre for Sustainable Agriculture, Hyderabad, empowering farmers to use indigenous knowledge to produce the botanical themselves is the solution. For instance, neem seed powder can be made available to farmers who would then just need to mix it with water before use. The powder can be stored up to five months in polythene bags. Similarly, garlic powder can be used to make a mixture with green chillies and use the concoction against pests of cotton.

There is another school of thought that suggests traditional knowledge should be modified to an extent to make commercially viable products. In Ahmedabad, the Sadhbhav sristi Sansodhan Laboratory has created a database of farmers' knowledge on botanicals. Using this information, the laboratory has conducted experiments on a large number of grassroots practices and herbal formulations reported by the innovators. Use of Lantana camara extract to control cotton pests is a good example. The organisation hopes its products will be commercialised through small and medium scale entrepreneurs and even multinational companies. Royalties will be paid to innovators.

Ramesh Patel, secretary sristi, feels the reason researchers are not able to come up with products is because of the haphazard research. They do not have a database but screen every plant they feel may work. Instead, researchers would do better if they would work with farmers. "The farmers should be consulted in the decision-making process. Com-munication should be kept open at all stages," says Patel.