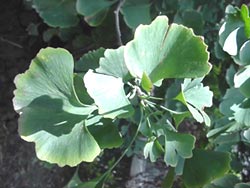 in sharp contrast with earlier evidence, a recent study from the Massachusetts-based Bronfman Science Centre indicates, that several health supplements derived from the Ginkgo biloba tree are ineffective. The earlier studies, generally in tandem with traditional Chinese wisdom, had propounded that the tree compounds can improve memory, attention power and brain functioning.

In the Bronfman study, the preparations were evaluated by studying their effect on neuropsychological functions of 230 people older than 60 years. For six weeks, participants were randomly given 40 milligrammes of ginkgo products or a matching placebo every day. Fourteen tests were carried out to study their effects. These included standard neuropsychological tests of learning, memory, attention and concentration. The researchers found that none of the study subjects benefitted from the products. "The results indicate that when taken following the manufacturers' instructions, ginkgo products provide no measurable benefits," says Paul R Solomon, the lead researcher of the study.

However, other experts assert that the group came out with negative results as they carried out their study on healthy subjects, whereas the ginkgo supplements are mostly effective on patients who have significant brain impairment. "Studies have shown that such supplements work better under stress conditions. One cannot assume from the results of this study that the product is ineffective in both healthy and cognitively impaired subjects such as those suffering from Alzheimer's disease," says Yuan Luo, professor at the University of Southern Mississippi, usa.

George B Kudolo from the University of Texas, usa, even says that the study is very subjective and hence its results might not be giving the true picture. "Evidently there are a number of issues that need to be sorted out. Future research work would help find answers," says Steven T DeKosky from the University of Pittsburgh, usa. "In China, ginkgo supplements are used for treating a variety of ailments, and in the process they indirectly improve memory. Therefore, we have to validate its use for improving brain function ourselves," says Mary Siefert Zander from the University of South Carolina at Columbia, usa.