Plants use smell of cut grass to attract insects that can protect it, reveals study

Finding could help develop plants that are more resistant to pests 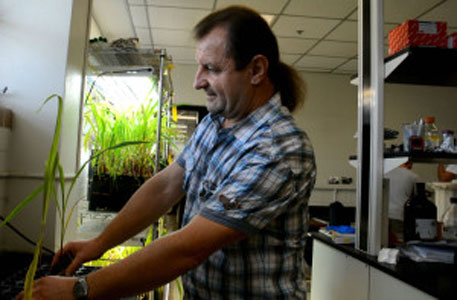 A new study reveals that plants emit a “mown grass” odour that not only repels harmful insects but also attracts beneficial ones. According to Michael Kolomiets, a plant pathologist and lead researcher of the paper, a plant is said to “communicate” when attacked by a predator.
“When there is need for protection, the plant signals the environment via the emission of volatile organic compounds, which are recognised as a feeding queue for parasitic wasps to come to the plant that is being eaten and lay eggs in the pest insect,” said Kolomiets.

"There are actually two roles for this molecule," he told Phys.org, a science, research and technology news service. "First, it activates the jasmonate hormone, which involves activation of defences against insects on the plant. This molecule, then, attracts parasitic wasps. They come to the plant that is being chewed up by insect herbivores and lay eggs in the caterpillar's body.”

In order to find out how this function takes place in plants during insect attacks, Kolomiets and his team used a  mutant corn plant that could not produce the green leaf volatiles or the “mown-grass smell” when cut or torn. The team proved that when you delete these volatiles, parasitic wasps are no longer attracted to that plant, even when an insect chews on the leaf.

“This is just a tip of the iceberg. We have found that this gene is required for many, many different physiological processes, such as drought tolerance,” said Kolomiets. “We observed that mutant plants are drought susceptible as well as susceptible to insect feeding. We are trying to identify the exact function of green leafy volatiles in drought tolerance and how it works.”

In an e mail interview to Down To Earth, Kolomiets said the study suggests that it is possible to breed plants for increased resistance to stresses by utilising the knowledge of what genes in plants are responsible for the beneficial effects. There is a great number of natural alleles that can be bred for if we know exactly which genes are responsible for certain traits and Kolomiets proposes tapping into natural diversity to identify superior genetic variations that can be introduced into the best germplasm.